Young Woman Takes Off Dress To Use As Mask, While Father With Three Daughters Struggles Not To Look 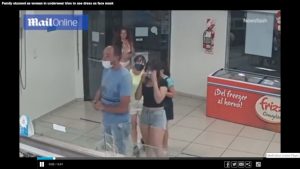 We are currently living in some of the strangest times in the world, much of the weirdness coming out of the coronavirus pandemic that we have all been enduring for the last two years.

A great example of this comes to us from the city of Godoy Cruz, which is located in the western Argentine province of Mendoza, where a young woman, for reasons that are as of now, completely and totally unknown, decided to come in an ice cream parlor where she was apparently told she needed to be sporting a mask.

Not having one, she apparently strips off her dress, leaving her clothed only in her bra and underwear, as a father who is already in the establishment with his young daughters, struggles hard to pretend he doesn’t want to steal a peek.

“In the CCTV footage, a father and his three daughters are seen approaching the counter to place their order as the woman enters the parlour, apparently in her undies,” The Daily Mail said in its report, going on to add, “However, the half-naked woman is told to put on a mask while she tries to tie her black dress around her head. The woman apparently protests as the father decides to lift his mask over his nose to avoid being told off as well. She then gives up trying to tie the dress and leaves the store after being refused service.”

According to Cronica, the woman was accompanied by 10 other people, none of whom had a face mask; she allegedly told the staff at the parlor, “Don’t ask for my face mask, I’m putting it on.” Cronica added that the group purchased 11 ice creams after someone found a mask.

According to the British government, “In all parts of Argentina you must cover your nose and mouth with a face mask or other garment in shared spaces, both indoors and outdoors. You may only remove your face mask outside as long as you keep a 2-meter distance between yourself and other people. Each jurisdiction/province might have different approaches to this rule. Make sure to check what rules apply in your jurisdiction.”

What in the world was this woman thinking? Surely she understood that her actions were inappropriate, right?