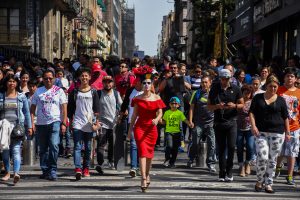 In a recent report from Univision, it appeared that Trump’s pressure on Mexico to cut off the flow of asylum seekers in the country on the way to America has led to a surge in support among Mexican citizens.

“In Mexico, the policy of President Trump to indiscriminately expel undocumented immigrants in the United States has generated a lot of criticism,” said Univision anchor Arantxa Loizaga, according to NewsBusters. “But now, according to a survey from the newspaper El Universal, 44 percent of those who participated in this poll believe that President López Obrador ought to expel from Mexico all the migrants who are there irregularly.”

While conducting interviews in Mexico City, Univision correspondent Alejandro Madrigal cited a new poll by the Mexican newspaper El Universal, indicating that since October 2018, the percentage of Mexicans who believe their government should prevent unauthorized immigrants from entering and crossing through their country has grown from 49% to 61%.

ALEJANDRO MADRIGAL, CORRESPONDENT, UNIVISION: In Mexico, the presence of the immigrants is now starting to become irritating. Six out of every 10 Mexicans agree that the Government should prevent them from crossing, and only one in ten people think they should be allowed to travel freely through the country. This according to a survey in the Mexican newspaper El Universal.

FIRST UNIDENTIFIED MAN ON THE STREET: Stop them and return them in a dignified way, not… not with violence.

SECOND UNIDENTIFIED MAN ON THE STREET: I would simply not let them go through because, as I mentioned, we already have enough problems of our own.

Now, why does that sound familiar? Where have we heard, “we already have enough problems of our own” before?

Oh, that’s right, it’s only what conservatives have been saying for years!

The poll cited by Univision also stated that 54% of Mexicans do not want their government to offer work visas to the asylum-seeking wave of Central Americans stampeding into their country. The same poll also found that 47% of Mexicans believe President Trump will deliver on his threats to impose tariffs on Mexican imports, while 21% do not.

Folks, we know that illegal immigration is not an issue of racism.

We could be having 100,000 pasty-white Canadians crossing over into the country each month and—guess what—illegal immigration would still be a problem. Especially if they’re anything like this guy.

It’s not about race, it’s about a country’s sovereignty and its finite resources. It’s about upholding the law.

I can’t believe we even have to explain this to people.