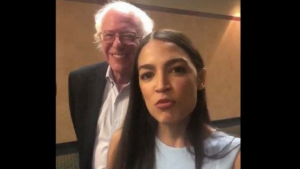 “Healthcare for all” is very, very expensive.

This is the cruel reality of socialism that most starry-eyed Marxists never think about, and if they do, they think it’s because it’s totally “moral” to force funding for all their free stuff at the point of a gun. You know, because the richer you get, the less virtuous you become.

I’m sure this will come as no surprise to you, but ever since Alexandria Ocasio-Cortez, the 28-year-old socialist poster girl, joined forces with Bernie Sanders, the rambling Marxist grandpa, they’ve been working together to make sure that the American taxpayers pay more for everyone else’s free stuff than ever before.

Joseph Curl of The Daily Wire explains that in 2017, taxpayers spent $3.32 trillion to the Federal Government, who promptly overspent, leaving us with a $666 billion budget deficit.

Sounds like all we need is more government spending, right?

Um…apparenly we do, if you ask Sanders and Ocasio-Cortez:

Now comes Sen. Bernie Sanders with a new plan to provide “Medicare For All,” essentially a government-run health care program. Under the plan — heavily supported by the rising Democratic star Alexandria Ocasio-Cortez, running for a House seat from New York — every American would get health care for “free.”

If you’re good at math, you’ve probably figured out that this is insanely implausible. As Curl explains:

With the cost of the “free” Medicare program nearly equally the amount of tax revenue, it doesn’t take a genius to figure out that Americans would have to pay roughly double what they pay now in taxes. But Blahous’ study found that even that wouldn’t be enough. “A doubling of all currently projected federal individual and corporate income tax collections would be insufficient to finance the added federal costs of the plan,” because the program’s cost would grow rapidly.

And this, boys and girls, is why math is so important.

So you don’t get duped into socialism.