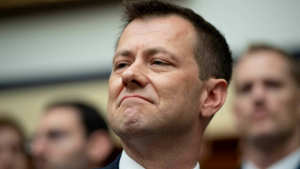 I’m all for private charity, and I think crowdfunding has been a powerful tool for helping those in need without all the red tape and incompetence of government assistance.

And even if the recipient of crowdfunding “charity” is a disgraced former FBI agent who sullied the reputation of the world’s top law enforcement agency, if someone wants to give their hard-earned money to them, that’s their prerogative.

But the amount of money that recently-fired anti-Trump texting adulterous former FBI agent Peter Strzok’s GoFundMe just raised is pretty telling of the current priorities for the Democratic party.

Remember, Strzok is a hero of the Democratic party, who has a tunnel-vision hatred for Trump. What little political platform they’ve been able to muster over the last two years pretty much includes impeach Trump, abolish ICE, and establish income inequality.

But in just a few days, Strzok has raised more money on his GoFundMe than most Americans make in five years.

Strzok on Monday opened a GoFundMe page to cover future legal costs and make up for the wages he won’t be getting now that the FBI decided he was too much of a liability, The Blaze reported.

As of Tuesday morning, the page had totaled more than $275,000 in donations. According to Business Insider, the median household income in America across all jobs was $59,039 in 2016.

After posting their original report, they added an update that “As of 3:00 p.m. PST Thursday [sic; they most likely meant Tuesday], the GoFundMe page had raised $339,573 and the goal had been revised upward to $500,000.”

That’s some payout for someone who entered the national spotlight for griping to his girlfriend about Trump in hundreds of thousands of text messages. And also a pretty accurate picture of the kind of people Democrats look up to these days.