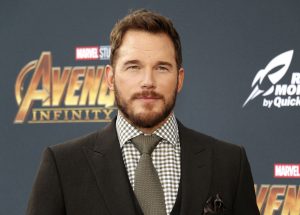 If you thought this crazy person’s hot take on “why white people love owning dogs” was nuts, take a seat—and maybe a Tylenol or two— because Twitter’s got more SJW craziness for you.

In a tweet on Monday, Vulture writer Hunter Harris posted a captionless photo of Guardians Of The Galaxy star Chris Pratt wearing a shirt that is so heinously offensive, one can scarcely believe any good man would leave the house in it.

Or, at least, you’d think that’s what he wore judging by their maniacally insane response to it:

No, you’re not missing anything. It really is just the snake and the words of the Revolution-era Gadsden Flag slapped onto an American flag, and it’s got the far-lefties all riled up.

What on earth could possibly be the problem with the Gadsden Flag, which has absolutely zero historical connections to racism in the Revolutionary War era and instead symbolizes the tenacity and grit our American forefathers had in ending the reign of British colonialist tyranny?

Well, Yahoo! News is happy to give this hilariously slanted explanation:

Although it is one of the symbols and flags used by the U.S. Men’s Soccer Team, Metallica, as well as some libertarian groups, over the years the flag has been adopted by Far Right political groups like the Tea Party, as well as gun-toting supporters of the Second Amendment.

It has therefore become a symbol of more conservative and far right individuals and, according to the Equal Employment Opportunity Commission of the US, it also is “sometimes interpreted to convey racially-tinged messages in some contexts.”

“Sometimes interpreted to convey racially-tinged messages.” So, that means Pratt must be immediately written off as a racist and “the worst Chris,” because let’s all go with the worst possible reason why he would choose to wear this shirt.

Which, of course, is exactly what Harris and her followers did. However, since her tweet hit the big headlines, it has been ratioed and mocked to the point where actual complaints about Pratt’s (awesome) shirt are hard to come by.

Instead, enjoy the People Of Twitter™ and their fantastic responses to this insanity.

No, you’re not the crazy one. And I’ll cover your contribution to the swear jar just this once.

Excellent use of a GIF, and a close second to this:

I sense we’re going to be seeing a lot of these shirts in the near future:

Next, this dude who mortally wounded any claims at moral high ground far-lefties claim when they clutch their pearls over Pratt’s shirt:

And, last but not least, my favorite:

At the time of this writing, Pratt hasn’t responded to being tagged (probably because he’s too busy being a productive human being), but this tweet has probably made the creator of that t-shirt a very happy camper.