You Guys. British Cops Are Handing Out Blunt-Tip Knives To Cut Down On Domestic Violence. Seriously. 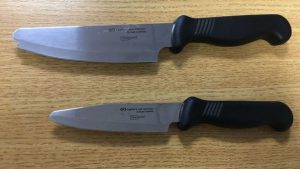 Let me paint you a little picture:

Imagine a man is out on the street walking his dog. Every few steps, he gets mad at his dog and starts beating it with his shoe. Someone sees this, calls the police, and the man is hauled off and charged with animal abuse.

Later on, after the man has paid his “debt to society,” whatever that may be in animal abuse cases, the man has been reunited with his dog and, as before, takes it for a walk again. Only this time, a cop meets him at the door and says, “Good sir, I realize you’ve had a bit of a history using your shoes to beat this animal. May I interest you in some flip-flops so you won’t hurt the dog again?”

Sounds stupid, right? The shoes didn’t hurt the dog, the man wielding them did, and if he’s got a habit of beating his dog, what’s to stop him from using a belt, a book, or his fist?

Now, take that wildly absurd scenario and replace the dog with a woman and the shoes with a knife. Give the man a Cockney accent for good measure, because this ridiculous story is the new reality in Britain, where domestic abusers are being offered blunt-tip knives in the hopes that they’ll pretty-please not use them to stab their wives and girlfriends.

According to The Independent, Nottinghamshire Police are testing out a new “violence prevention” programme (Euro spelling just to be fancy) that will offer households with a history of domestic violence the chance to exchange any sharp knives they’ve got lying around for some special, anti-stabby knives with no tips.

So, folks will still be able to dice up tubers for fish and chips, but without the whole “stabby” element of the knife thing, to use the technical term.

According to Sky News, the hilariously-named Police and Crime Commissioner Paddy Tipping praised the scheme, telling Nottinghamshire Live: “Having safer implements in the home can reduce injuries and save lives. It is important that we get the message across that the chance of being stabbed on the streets is low and there is a bigger problem around domestic violence.”

“We do see a fair amount of knife-related incidents in domestic abuse, not just on the streets,” a Nottinghamshire Police bigwig told the press about the pilot program. “This is a measure we need to take. We want to reduce that risk. It is a trial. We have about 100 of them – and we have so far given out about 50. The knife is blunt at the end – but still functions as a knife – so you can’t stab someone.”

The program is rendered utterly impotent, on top of already being woefully stupid, by the fact that it’s a voluntary program. Wife-beaters—or, should I say “wife-stabbers”—can simply say, “no thanks,” and the bobby will just say “chip-chip-cheerio!” and be on his merry way. Or, at least that’s how I imagine it.

In case you’re curious, here’s an up-close view of the anti-stabby knives, courtesy of the geniuses in the Nottinghamshire police department: 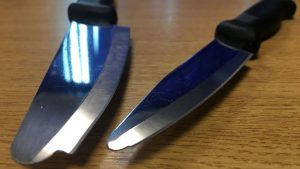 It can still function as a knife? So, what if someone decides they don’t quite fancy stabbing and would rather use it for, say, cutting someone? And, let me tell you, even the bluntest instrument can still be pretty stabby if you’ve got the biceps for it. Didn’t anyone think of that?

Sadly, this program targets families who, for various reasons, remain under one roof even after attempted stabbings in domestic violence incidents. There’s not a single thing funny about that, except for the Nottinghamshire police’s sheer, Mr. Bean-esque ineptitude in handling the situation.

Dr. Jessica Eaton, a research psychologist specializing in domestic violence and staunch advocate for survivors, had a few brilliant words to say about the program:

Wondered if @nottspolice are going to give women in high risk DV some kiddie safety scissors too? Maybe remove all the DIY tools from the house? Remove all the forks? Stanley knives? Razors?

Or maybe they could just prosecute the men they know are likely to kill their partners?

Now now, don’t give them any ideas, Jess.

I’d like to congratulate the entire British public for being able to see why giving blunt knives to high risk DV offenders won’t work to protect women and girls.

Congratulations, you officially know more about public protection and DV than @nottspolice

At first, Dr. Eaton thought the initiative was a joke. “If you are going to take knives, why not take forks? Because I work with women who have been stabbed with forks.”

Well, there is one silver lining to this mess: they at least picked an apt name for these “no point” knives, because there is no point to them whatsoever.