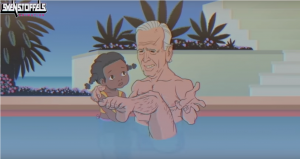 I’ve been pleading for months now for someone to just throw Joe Biden in a burlap sack and deliver him to the nearest old folk’s home, but to no avail.

The dude is still out there, sticking his forehead in girls’ faces and giving awkward, hilariously incoherent rants at campaign stops.

He gave us yet another gem of senility over the weekend at a stop in Council Bluffs, Iowa.

As his wife, Jill, introduced him and gave a few words on how a President should act and speak, Biden demonstrated that he sucks at both by biting his wife’s finger. Because who needs to move out of the way like a normal person when you can be a complete and utter weirdo:

YOU CAN'T MAKE THIS UP.

Joe Biden just NIBBLED on his wife's finger at a campaign stop in Iowa. pic.twitter.com/PcCqTMPJez

Now, I’m not here to judge what a man and his wife can and cannot do in the way of biting and nibbling—that’s a debate for another stage—but what in the name of Betsy Ross was the dude thinking? Ew.

Sadly, that’s not the weirdest thing to come out of Camp Biden this go-round.

A 2017 clip surfaced over the weekend of perhaps the strangest, creepiest, most nonsensical rant the man has conceived to date.

At a stop in Wilmington, Delaware, Biden proceeded to tell rally attendees all about his experience as a lifeguard and…his leg hair. Seriously.

This can’t be real life…

And by the way, you know, I got a lotta… I got hairy legs that turn… that, uh, that that that… that turn uh, uh, uh, blond in the sun. The kids used to come up and reach in the pool and rub my leg down so it was straight and then watch the hair c-come back up again. They’d look at it… So, I learned about roaches, I learned about kids jumping on my lap, and I’ve loved kids jumping on my lap.

This happened in 2017, folks, and yet somehow the dude is still running for President. What in the fiery pit of hell is even happening here?!

To make matters worse, or better, I don’t know anymore, some sick genius made a cartoon of Biden’s leg hair speech:

I just want to cry.