Yet Another Liberal Accosts A Man In A MAGA Hat, And Yet Again It Blows Up In Her Face 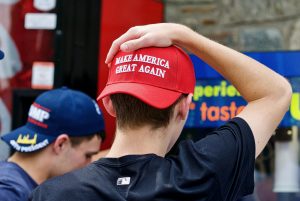 I guess it only takes a couple of years for folks to forget that whole “love trumps hate” business and instead resort to squawking and screaming at anyone who believes differently, especially if their victim has the nerve to wear their beliefs on their sleeve.

Or, in this case, on their hat.

That’s right, folks, yet another MAGA hat wearer has been accosted by someone taking the “warrior” part of her SJW role a little too seriously. And, once more, it didn’t turn out the way she expected.

While on the scene at a Louisiana jazz festival, a sports writer for SB Nation, a property of Vox Media, beheld a troubling sight.

There, standing before her like some hideous beacon of personal liberty and political diversity, was a man. A man in a ‘Make America Great Again’ hat. Horror of horrors!

The writer, Natalie Weiner, knew she had to take action quickly, lest anyone merely carry on enjoying the shows and the atmosphere while The Hat Which Must Not Be Worn infects the space with its evil, white supremacist energy.

Thankfully, Ms. Weiner took to Twitter to regale us all with the tale of her heroism. Oh, and she does so with a fair dose of profanity, so consider this your “earmuffs” warning: 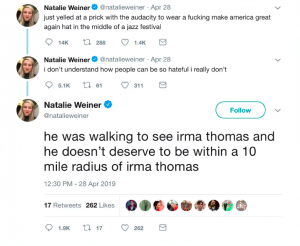 Well thank the heavens above that Ms. Weiner was there to impede the free travel of a man who dared to vote the wrong way and wear the wrong hat. Whoever Irma Thomas is, she’d better thank her lucky stars Weiner was there to prevent her from accidentally entertaining a politically dissenting jazz fan. Unthinkable tragedy was truly avoided this day.

Of course, as the unfavorable comment:retweet ratios on Ms. Weiner’s now-private tweets show, the fine folks of Twitter didn’t take too kindly to Ms. Weiner’s verbal assault on a presumably peaceful festival attendee—or her bragging about it.

How dare someone exhibiting no ill intentions enjoy music…

Maybe Kyle Malone was too busy watching all the Endgame fan theory videos on YouTube to get the latest social justice memo that wearing the MAGA hat is an unequivocal signal of ill intentions and makes the wearer ineligible to enjoy jazz music, coffee, or literally anything consumable in the public square.

Regarding the wearer’s right to be “within a ten-mile radius of Irma Thomas,” this dude nailed it:

But, then, that would require a basic understanding of the economy, purchasing goods and services, and natural rights such as undisturbed travel. That might be a bit of a tall order for folks like Weiner.

Finally, someone giving her the validation she seemed to crave so desperately. TYFYS, Weiner.

Isn’t it ironic that you tweet about not understanding “how people can be so hateful” while displaying unjustified hate towards a stranger for what he’s wearing. Guess what, it’s OK for people to disagree with each other and be civil. Please seek help.

And, if you ask me, the coup de grace:

If you are so psychologically weak that a hat ruins your night, you need to evaluate HOW you were "conditioned" to have this response, and by WHOM.
But, you wont. You're happy being controlled.
Good luck. https://t.co/3xhKe7cHAh

Of course, now that Ms. Weiner’s Twitter account is on total lockdown, she’s free to enjoy her hateful echo chamber unchecked. In Louisiana, a state Donald Trump won by a landslide, she’s bound to run into another MAGA hat-wearer sooner or later.

In the meantime, I hope the gentleman she berated enjoyed that Irma Thomas show. He certainly deserved to.