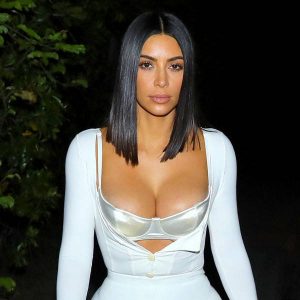 Your wait is over, America, and salvation is nigh: Kim Kardashian is finally ready to regularly share her political views.

That is, of course, a blessing, because this nation is in need of all the help a woman who starred in a sex tape and now argues weekly with her family on a reality show can bring.

“Sometimes I feel like I want to speak out more about political issues,” the 36-year-old says in the September issue of Harper’s Bazaar Arabia. “You have to be really careful about what you say, because a lot of things can be taken in the wrong context and I always want to be respectful; I don’t want to hurt anyone’s feelings.”

Already you can tell that KK, who holds a degree from Marymount High School, is a deep thinker. And sensitive, too. Plus, she seems like the kind of rock-steady personality who doesn’t just say one thing and then do anoth — wait, never mind, she is.

“Anyone can run the U.S. better,” Kardashian says. “My daughter would be better.”

Well, that wasn’t very respectful to the president of the United States.

Also, it’s not very accurate. Her daughter, North West (get it? Clever, huh?) is just four years old. That means she can’t read, except for books about clocks and shoes. She can’t vote, she can’t drive, heck, she can’t even rent a car. Oh, and she’s also 31 years too young to actually qualify to run for president.

But Kardashian tossed her pledge of respect out the window in seconds because she’s just so darned frustrated, darn it. And when she’s poring over the headlines each day, that frustration builds and builds.

“We’ve worked so hard to get to where we were and to have so many things that we were so proud of in our country, to just literally revert backwards is the most frustrating thing,” she says. “Every single day when you can’t really believe what’s going on, the next day it’s something else even more crazy and tragic. It’s really scary, the world that we’re living in now. And when you did feel safe at home, now with Trump in presidency, you just don’t feel safe any more.”

Yup, you don’t feel safe at home anymore because Trump is president. Thank God she has come along just in time to put into words what we are all feeling. And yes, we’ll say it: We’re thinking KK is the voice of this generation.

But the callipygian strumpet who tweets and Instagrams near-naked pictures daily wants everyone to know her views on feminism, too.

“I said once before that I’m not really a feminist,” says Kanye West’s wife. “But I feel I do a lot more than people that claim that they’re feminist. To clarify what I said before: I feel in my soul I’m a feminist. I just don’t need labels to make me feel or know what I am inside. Modern feminists are all the girls around us today. Every time you look on social media and there’s someone standing up for themselves, to me that’s a modern feminist. There’s such an amazing group of girls that empower each other.”

Heck, maybe she and Kanye can run — but since they won’t be able to decide who gets top billing, they could just be co-presidents. Sure, we know that’s a pipe dream: Like a reality star could ever be president!