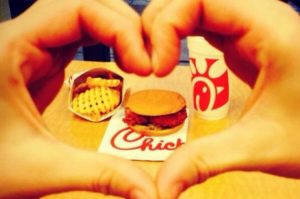 It’s been so long since calls to boycott Chick-fil-A first rang out into the Leftiverse that I sincerely wonder if anyone even remembers why they’re supposed to spurn the popular chicken joint.

In fact, the food there is apparently so good (have mercy on this writer, folks, I’ve never had Chick-fil-A) that even some of the most rabidly vocal leftists literally can’t hold themselves back from eating it and had to devise copycat recipes to avoid supporting CFA.

If you’d like a quick reminder as to why America’s favorite cow-saving, Lord’s Day-honoring restaurant became so hated by liberals, it’s because CEO Dan Cathy made a couple of comments back in 2012 about his personal views on same-sex marriage. That’s literally it.

Never once have Cathy’s beliefs about traditional marriage been relevant to the way he does business, nor has CFA ever treated any of its LGBTQIAWXYZ customers or employees differently or unfairly. Their CEO is just a thoughtcriminal, that’s all.

Now, to anyone for whom this is such a grievous sin that they simply cannot partake of that delicious chicken, fair enough. Your choice. We still have a kinda-sorta free market, and boycotting is infinitely better than using political or regulatory means to enforce a social agenda. As a capitalist, I affirm that folks have the right to boycott Chick-fil-A and anyone else whose owners or employees personally disagree with on literally any subject.

However, I also affirm the rights of the rest of Americans to ravenously consume those tasty bird sandwiches and catapult CFA into the top 3 performing fast food restaurants in the country.

In fact, CFA’s sales have tripled in the years since Cathy first made his comments about traditional marriage. I don’t know, but maybe—just maybe—the masses of Americans who do still cling to conservative Judeo-Christian values also like to “vote with their wallets”, so to speak.

If the reports are true that the food is just that dang good, I’m sure CFA doesn’t need good optics to help them arrive at the #3 spot. Still, it doesn’t hurt that you can barely scroll through a news feed these days without coming across a story about management or staff at CFA doing some generous or heroic deed for members of their communities.

Folks, y’all can go on ahead and boycott Chick-fil-A ’til the cows come home with their “Eat More Chikin” signs. The rest of the country appreciates great food, great service, and traditional values.

Heck, I might even make the drive to get myself some waffle fries.