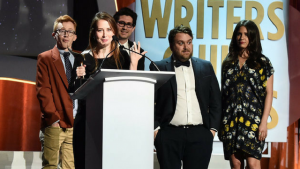 Here’s your mega-facepalm moment of the day.

A far-left writer for far-left Jimmy Kimmel is incensed that her far-left friend behind the far-left sketch comedy show, The Break with Michelle Wolf, had her show canceled on Netflix.

Right on cue, Bess Kalb, a writer for Jimmy Kimmel, is blaming Wolf’s exit from Netflix on, say it with me now, sexism.

She apparently fails to see the irony that she herself is gainfully employed as a comedy writer and has yet to be fired due to her gender.

Michelle Wolf’s cancellation goes to show if you’re a talk show host with great jokes and perfect sketches, it’s best if you’re not a woman.

“Michelle Wolf’s cancellation goes to show if you’re a talk show host with great jokes and perfect sketches, it’s best if you’re not a woman,” she pontificated on Twitter over the weekend.

It’s funny to me that Kelb works in television and seems to be unaware that Ellen Degeneres has had a successful talk show for a whopping fifteen years, and is apparently so influential as a talk show host, Barak Obama awarded her the Medal of Freedom, the highest civilian honor there is (although we doubt it was that deserving, we have a feeling Kalb certainly would have thought it was).

This is the kind of mental oppression liberal women keep themselves under. They refuse to accept that a woman can truly compete with a man on an equal level, so when Wolf’s show was subject to the natural conditions of the market, i.e. Netflix based their decision to keep her on the air on whether or not people were watching (they weren’t), obviously it was sexism and not just how business goes.

You see, feminists are in reality convinced that women aren’t equal to men. This is why when women achieve something, they believe it’s achieved in the face of adversity, and when they fail, it’s due to adversity.

Nevermind that women have never in the history of all mankind been treated more like men than they are now.

As long as they’re women, they’ll be considered oppressed by the left.

But that’s the perpetual victim mentality of the left for ya.