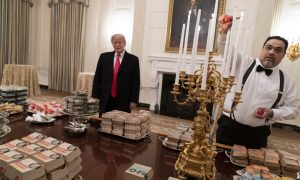 On Monday, President Trump hosted the Clemson Tigers to celebrate their NCAA victory earlier this month.

But since the government is shut down and all, which I have on good authority has something to do with Trump being Hitler, the White House was without a chef to prepare the young champs a hearty celebratory feast.

So, in true Trumpian fashion, the President went out and bought a crap ton of fast food instead.

On his own dime.

This is, of course, undeniably cool of the president as well as pretty funny, and he clearly meant it that way. The Tigers also, as photos and videos of the events indicate, also got the joke and greatly enjoyed themselves.

After all, what college athlete wouldn’t enjoy a huge fast food feast with the President following such a big win?

Amazingly, on what wasn’t even a slow news day amid shut down non-negotiations and an amazing hit piece on Russian spy something-or-other over at the NYT, the Washington “Democracy Dies in Darkness” Post actually fact-checked the fast food order.

After the Post determined that Trump likely spent between $2,437.11 and $2,911.44 on the feast, depending on whether he took advantage of McDonald’s 2-for-$5 menu, the outlet had to take some spiteful dings at the president. The Post notes that Trump originally said he bought 300 hamburgers, but later said he bought “1,000” burgers and later, “over 1000 hamburgers etc.”

Pictures seem to suggest the number was closer to 300, but we don’t know if there were more burgers in another room, or if Trump was totaling all the items but just said burgers, as his tweet about the event indicated.

It may be a joke (I hope it is) but given how the paper covers this president it’s kind of hard to tell. Trump said at the banquet that he bought 1,000 burgers for Clemson and that “It was piled up a mile high.” The Post felt the need to fact check this, writing:

“FACT CHECK: At two inches each, a thousand burgers would not reach one mile high.”

Wow. Just….wow. Is this even real life?