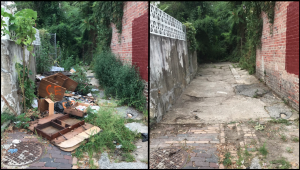 It’s amazing the things that Americans can get done when they turn off the TV, get off the couch, and hit the streets.

According to RedState, President Trump’s harsh rebuke of the city of Baltimore had an unintended consequence the outrage mob hadn’t counted on: Trump supporters came to the city in droves to help their neighbors clean up the rat-infested, trash-filled streets:

According to OANN, the group was led by activist Scott Presler, who lead over 100 volunteers after the controversy first arose in the media. Presler said his cleanup effort started with a simple tweet about going to clean up Baltimore, even if it’s just by himself. The tweet went viral, and before he knew it the effort had a slew of volunteers ready to go.

Apparently, actual Baltimore residents are just as fed up with the state of their city, appreciative of any help they can get in tackling the issue, and don’t understand why in Sam Hill everyone is so upset that Trump, along with many others, drew attention to the city’s poor condition:

What an outpouring of love in West Baltimore! #AmericansHelpingAmericans #MondayMotivation pic.twitter.com/klC0RQpqFb

The volunteers also came across an interesting little artifact that, if genuine, reveals that these streets haven’t been cleaned since Obama first won the presidency:

We found this newspaper while cleaning up trash in West Baltimore.

I won’t say there’s a direct correlation between the increase of leftist power and the increase of urban regions resembling third world countries, but—wait, yeah, I will say that, and I think I just did!

People, this is the good stuff. We can own the libs all day (and have a lot of fun doing it), but when it comes down to it, what are we truly accomplishing if we don’t demonstrate the power of personal liberty and community activism out in the real world?

Imagine the difference we could make in hearts and minds if we put down our phones and remotes, grabbed a trash bag or ten, and got to work!