WOW: Bernie Sanders Hires Illegal Immigrant for 2020 Campaign Because Why Not 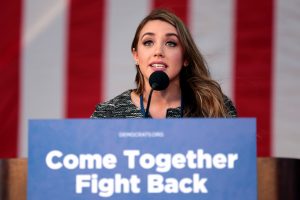 So far, the race for the Democratic nomination in 2020 seems to be a race for who can be the most radical.

After all, all those milquetoast lily-white Washington elitists have to find an edge somehow, as their lack of melatonin or interesting family history gives them a disadvantage in an era when things like merit and policy take a backseat to culturally Marxist brownie points.

Bernie Sanders, who burst his way into the race last month, blowing the more intersectionally-rich competition out of the water, has nonetheless been rebuked by the gatekeepers of diversity who say he is far too white, far too male, and far too unconcerned with intersectional politics in general.

So he’s found a solution.

Since he’s already got the Soviet-style politics on lock, he’s decided to hire an illegal immigrant to give his campaign and edge.

Sen. Bernie Sanders’ new deputy national press secretary likely won’t be eligible to vote in the 2020 election due to what she says is her status as an undocumented immigrant.

The hiring of Belen Sisa, an Arizona leftist activist, was announced Wednesday evening. Sisa, who says she was brought to this country illegally from Argentina by her parents at age six, is currently protected from deportation under President Barack Obama’s Deferred Action for Childhood Arrivals, or DACA, program.

Despite her immigration status, Sisa has remained active in liberal politics over the years. In 2016, she worked as a page to the Arizona delegation at the Democratic National Convention and in Latino outreach for Sanders’ 2016 campaign.

Oh, and she also has a criminal record on top of questionable immigration status:

She has been arrested at least twice for protests throughout her activist career. As a college senior in 2017, she was jailed for her role in a sit-in outside of Sen. Chuck Schumer’s, D-N.Y., office. While in jail, Sisa told reporters that she organized a “prison strike.”

Just weeks before that, she was arrested for a protest outside the Senate Hart Office Building. Both protests were over immigration reform and a demand that Congress pass the DREAM Act — a bill that would permanently legalize children who were brought into the country illegally — “cleanly,” without extraneous provisions.