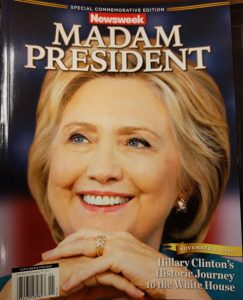 Donald Trump is President of the United States of America. Hillary Clinton is not. And, she’s not going to be, even if President – read it again, President – Trump resigns. Newsweek magazine, however, has a different idea. According to a story the left-leaning publication put out last week, the losing candidate in the 2016 Presidential election still has a chance to win the White House if only…

Our country’s founders left us a constitutional republic, a brilliant form of government that gives each citizen a voice in who leads us without succumbing to mob rule. Also, our election cycle allows for a peaceful transfer of power at regular intervals. Self-governance, however, requires certain qualities our forebears took for granted – things like empathy, self-discipline, self-reliance, a strong moral compass, and a commitment to truth, honor, and respect.

Those things also make a free press viable.  It wasn’t by accident that freedom of speech was included in the very first amendment made to our Constitution. The founders had lived without that protection, and they knew how important it would be in maintaining the liberties they gave so much to secure. The ability to openly discuss ideas without fear of reprisal, whether in private or publicly, is how we hold our leaders accountable.

It seems our forebears overestimated their descendants. Those qualities they took for granted and assumed we would protect and nurture are things that we, as a people no longer possess or even tolerate. Nowhere is that more apparent than in the American “news” media. Over the last ten years, especially, they have led the charge towards a contentious, my-way-or-no-way society that stands in direct opposition to everything our nation’s founders envisioned.

As a candidate leading in the polls, Hillary Clinton was quick to point out that our way of life depends on all the candidates and their supporters accepting the results of an election. The press trumpeted her statement ad nauseum right up until November 8, 2016. On November 9, everything changed.

The election wasn’t legitimate. The Russians influenced it. Fox News was in the tank for Trump. Voter suppression kept Democrats from voting. The Electoral College was outdated, sexist, racist, homophobic, Islamophobic, and altogether a bad idea. It needed to be changed and the election called for Clinton.

At that point, the mainstream media had shed any pretense of objectivity and done everything in their power to put Clinton in the White House, so their fits of anger and indignation were predictable. Once the new President took office, however, most of us hoped, naively, that we could get on with life and do it all again in 2020. It’s been obvious for quite a while that the media, and the left in general, thought Clinton was referring only to election results that went their way.

What’s even worse than their childish tantrums is the fact that Clinton was right. Our government and our way of life depend on letting the process work. That means the majority of American “journalists” either have no understanding of how a constitutional republic functions, or they would rather see America fall than accept Donald Trump as President. Apparently, these people getting their way is more important than either your or my liberty.

Freedom of speech, including a free press, is not negotiable for a people committed to the pursuit of life, liberty, and happiness. Neither is responsibility, but that is exactly what the people who control our flow of information have traded in for their petty, personal agendas. It’s not a recent thing, but the 2016 election put their self-centered childishness directly in the spotlight.

Seeing America’s response is going to be like watching a train derailing or a passenger jet crashing – too scary to watch and too terrible to turn away. Let’s just hope we don’t see the same results.