Worried About North Korea? Let me help your fears 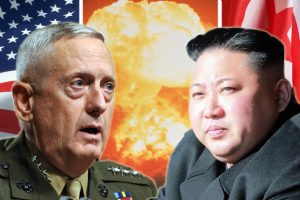 If you’ve been laying awake at night worrying about our little fat nemesis in North Korea and his pudgy finger on the button of a nuclear bomb then I seek to allay your fears with the mere mention of one name: James “Mad Dog” Mattis, the United States Secretary of Defense.

You may recall that the Marine Corps Times once called Mattis the “most revered Marine in a generation.” According to reports, Barack Obama forced the Marine legend out of his job as leader of Central Command early in 2013 because he rubbed civilian officials the wrong way, and forced them to answer tough questions regarding Iran. Ain’t that somethin’?

But now, thanks to President Trump, Mattis is in charge. One of his best know quotes is: “I come in peace. I didn’t bring artillery. But I’m pleading with you, with tears in my eyes: If you f*** with me, I’ll kill you all.”

On Sunday, Mattis made a short public announcement regarding the North Korean threat following the alleged testing of a hydrogen bomb by the hermit kingdom:

We have many military options, and the president wanted to be briefed on each one of them. We made clear that we have the ability to defend ourselves and our allies, South Korea and Japan, from any attack, and our commitments among the allies are ironclad.

Any threat to the United States or its territories, including Guam or our allies, will be met with a massive military response, a response both effective and overwhelming. Kim Jong Un should take heed of the United Nations Security Council’s unified voice. All members unanimously agreed on the threat North Korea poses, and they remain unanimous in their commitment to the denuclearization of the Korean peninsula because we are not looking to the total annihilation of a country, namely North Korea. But as I said, we have many options to do so.

This is serious business for North Korea. Gravely serious. Thankfully we have the right man in position for these troubling times. So sleep well my friends. Mad Dog is looking out for you.