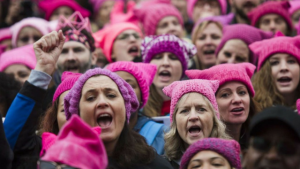 So, it’s not exactly news that the Women’s March is full of hypocrites (that and some very weird hats), but this week they outdid themselves by adamantly opposing a newly signed law that helps combat the black market sex trade online.

Now, it’s one thing for them to defend certain ladies of the evening, but the reason these so-called feminists are all in a tizzy is that a website that has been exposed and even criminally prosecuted for their deliberate protection of sex traffickers is beyond the pale.

The website, Backpage.com, recently shut down, much to the chagrin of people like the Women’s March ladies who considered the virtual open market for sex trade something that actually empowered women, rather than enabled their captors to sell them for sex or, in many cases, led to their murders.

“There is so much wrong with an entity that purports to stand for women in its official capacity both promoting the legalization of prostitution and defending a company that is currently being prosecuted by the federal government for the trafficking of women and children,” writes Ashley McGuire at Real Clear Politics, responding to the Women’s March “Orwellian” tweet, as she referred to it, from April 7th.

. The shutting down of #Backpage is an absolute crisis for sex workers who rely on the site to safely get in touch with clients. Sex workers rights are women’s rights. Follow @SafeSpacesDC @melissagira @swopusa @KateDAdamo @supporthosechi @anaorsomething for more info. https://t.co/S3Orx3aM8Z

“The shutting down of #Backpage is an absolute crisis for sex workers who rely on the site to safely get in touch with clients. Sex workers rights are women’s rights. [email protected] @melissagira @swopusa @KateDAdamo @[email protected] for more info,” the Tweet reads.

As far as Backpage providing “safety” to their users, that includes criminals, as McGuire explains:

“A years-long Senate investigation found with absolute certainty that it wasn’t just running ads selling trafficked women and children, it was actively helping their pimps to skirt the law and hide from investigators. The title of the Senate report detailing the results of the investigation, ‘Backpage.com’s Knowing Facilitation of Online Sex Trafficking,’ clearly didn’t mince words,” she says.

“Even as Backpage employees helped pimps code their ads so that things like the age of a girl being sold for sex was obvious to the buyer but not to an investigator (or a terrified parent), the company hid for years behind outdated technology laws that granted blanket immunity to websites for any criminal activity.”

All this changed with the passage of the Fight Online Sex Trafficking Act (FOSTA), which criminalized the facilitation of online sex trafficking, pulling the rug out from Backpage’s nefarious activities.

Isn’t this something that a group that supposedly supports women should be in favor of? Apparently not.

“The Women’s March could barely stoop any lower after it blocked pro-life feminist groups from official involvement in the 2017 event and tweeted that their presence wasn’t welcome,” McGuire says. “And there was the March’s public spat with gender ideologues about whether or not the group’s crass choice of female genitalia as their official emblem was intolerant because it wasn’t inclusive of biological males who self-identify as women. But now, the Women’s March is officially endorsing prostitution and defending the enablers of human trafficking.”

McGuire denounces Backpage, imagining those who loved the victims of its friendly treatment of criminal predators would agree, like “the mother of 16-year-old Desiree Robinson, who was sold into sex on Backpage for $250 and then killed and dumped in a garage on Christmas Eve, would agree. Or the family of Ashley Benson, who was bought on Backpage and then strangled by her buyer after an argument about money. Or the mother of Alexus Garcia, whose body was burnt after the man who bought her on Backpage killed her and tried to cover up his crime.”

Backpage was many things, McGuire says, but “safe it was not.”