Allow me to give you guys a dating tip and a strong piece of relationship advice: If she ever attended a women’s march…she’s not the girl for you.

One year after the inauguration of Donald J Trump liberal women once again took to the streets to march in the name of feminism and women’s rights.  Donning their knitted vagina hats and shouting down the perceived patriarchy they reminded the world that they are a loud and outspoken lot.

The fact that more women are now in cabinet or high positions within the Trump administration than any other presidency in history does not fit their brand of feminism however.  One quick look at a sampling of the protest signs they carried will tell you their main agenda: They don’t want equality, they want control!

One 6 year old girl in the San Francisco march carried a sign that said, “Don’t piss me off!”

Well alrighty. Take it easy there Wonder Woman.  I’m sure she’ll grow up to be a sweetheart.  Oh wait…I don’t think terms like sweetheart are allowed anymore.

“Grab the patriarchy by the balls.”

“We are the granddaughters of witches you weren’t able to burn.”

Here are a few interesting signs that were on display.

This girl is holding my favorite #WomensMarch sign so far. #WomensMarchDenver pic.twitter.com/TEXsv9dCxc

And of course, my personal favorite: 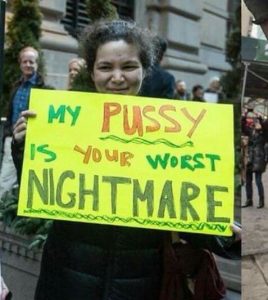 Lady I’d rather snuggle up for a nap with Freddy Krueger than get anywhere near your…..nightmare.

And then of course there’s this oldie but goodie that defies all logic: 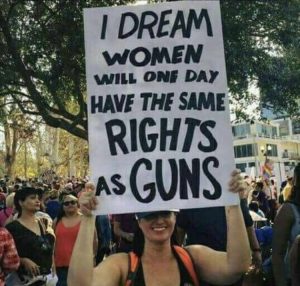 So you want the same rights as guns huh? Fine. You can no longer go to a polling place, enter a courtroom, board an airplane, or be around children. You can’t be in public unless someone has a license to possess you and when left alone you must be locked up.

And listen up men:

Keep marching ladies. Keep marching. But remember…under Donald Trump the unemployment rate for women is at a 18 year low. Be sure to tell your ovaries.

Rep. Babin Tears Into Biden For Allowing COVID-Positive Migrants Into The US
The Political Cowboy

No articles were found at this time.

Michael Cantrell - July 29, 2021
It seems that Vice President Kamala Harris has a whole lot of work to do in order to give her favorable rating a big...

Rep. Babin Tears Into Biden For Allowing COVID-Positive Migrants Into The...

Director Of The CDC Claims That European-Style Health Passes ‘May Very...