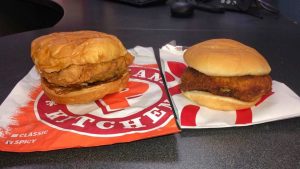 This yankee writer is going to go ahead and admit that I’ve never actually had any food from Chick-fil-A, not even when I lived in Virginia.

To be clear, I did order food from Chick-fil-A once in good ol’ Martinsville, VA, but it was a salad and I drove off with it on the roof of my car after chatting with a friend in the parking lot. Ah, to be young and stupid.

Now, here in the rural, rolling hills of Upstate New York, I’d have to drive into the city to get me some of the chicken I hear liberals whine about (here is what the denizens of said city had to say when the “hate chicken” was slated to open up shop in the local mall) and literally every other person except liberals rave about. And I hate driving into the city. Plus, I just love a good cheeseburger. Have mercy on me.

I also have not eaten food from Popeyes but, once again, I did drive through and order some for my mom during a shopping trip. This was before the Great Chicken Sandwich War of 2019™, but we still managed to wait a good half an hour in a drive-through that had only one other car in it at that moment. Not fun, but by no means as bad as other Popeyes experiences coming to light in the Chicken Sandwich War.

I hear they’re called “sandwishes” because you wish you could get one, but they’re all out.

Another young woman whose story I had the pleasure of stumbling upon has a far more educated opinion on the two chicken joints than this writer, and she has offered her experience of comparing the two chicken sandwiches as a hilarious cautionary tale so that the rest of us might not be led astray into the temptation of “the false prohpet’s chicken.”

“I need to repent. I was tempted by the false prophet’s chicken, and hope my testimony will help others from going down this path of sin. I saw the ads, the viral videos, the claims of Popeyes Louisiana Kitchen chicken sandwich overthrowing our holiest of grails Chick-fil-A,” writes Sharilyn Pettus in her now-viral testimony of bitter chicken disappointment and sweet chicken redemption, ashamed to admit that she also brought her friend Lauren “down this dark and fruitless path.”

Lauren arrived at Popeyes at 12:53pm and was met by a line wrapped all the way around the building and into the road. We both expected there would be a long wait but the sandwich would be worth it….what a terrible mistake.

At 1:22pm she finally made it to the screen to order. She was met by a nameless employee who sounded as if she spends her free time daydreaming of ways to trap the entire city of Nashville inside her Popeyes store and then burn it all to the ground. Said nameless employee then informs Lauren that they are currently out of chicken sandwiches, fries, apple pies and all sauces except Buffalo. She orders chicken fingers with buffalo sauce, Mac and cheese and a large sweet tea.

At 1:34pm she arrives at the pickup window where said employee halfway throws the food into her car window, and hands her a medium sweet tea (not the ordered large). 39 total minutes of wait time for not a single thing she actually came for.

Meanwhile, Sharilyn over at Chick-fil-A has a remarkably different experience:

At 12:56pm I log onto my Chick-fil-A mobile app and enter my order of a spicy chicken sandwich with Chick-fil-A sauce, fries, Mac and cheese (because those hardworking individuals heard us mention once that adding a comfort food like Mac and cheese to their menu sure would be nice, so they created a secret recipe and had it available in all stores 9 business days later) and a large sweet tea.

At 1:03pm, I pull into a designated mobile app parking spot and hit the “prepare order” button on my app. Exactly 2 minutes and 53 seconds later, a lovely, respectful young woman named Anna came straight to my car, smiled and asked me if I was “Miss Sharilyn”. She handed me my food, which I’m sure she and her coworkers formed a circle around and prayed over before cooking, and my large drink. She told me to have a wonderful day and be careful driving home. My food was double-bagged only to make it easier for me to carry. I didn’t even check to see if my order was correct because all Chick-fil-A employees across the country have already earned my trust.

Lauren and I meet up to find that our Chick-fil-A order is 100% correct and Popeyes not only ruined our day, but also forgot the Buffalo sauce – the only sauce they claimed to have in stock. The only item we could really compare was the Mac and cheese, since Popeyes was sold out of their entire menu. I can confirm that the Chick-fil-A white cheddar Mac and cheese made with real butter is far superior to the Popeyes boxed, velveeta, “I made this when I was hammered at 3am” Mac and cheese.

I’d like to interject here to say that it is my learned opinion that the offerings labeled “macaroni and cheese” offered by most fast food restaurants are usually “I made this when I was hammered at 3AM mac and cheese,” but, hey, that was a chance for Popeyes to rise above the rest.
“We, as a nation, should never, ever question Chick-fil-A’s authority ever again,” Sharilyn continued. “I would like to publicly apologize to Jesus, Anna and all Chick-fil-A employees and franchise owners for this day of backsliding. I have learned my lesson and will never step out on you again, Chick-fil-A. For the record, Chick-fil-A is better than Popeyes, even on Sundays.”
According to Business Insider, Popeyes is so ill-equipped to compete with Chick-fil-A that running out of sandwich ingredients is the least of their worries:

“I had an instance where a customer was threatening to assault me when I was taking out trash,” a California employee said. “A customer sees me and shouts: ‘Do we have a problem or what! Why no sandwiches! You guys are the third Popeyes to say so! You better stop looking at me or else!’ I was looking at the line.”

The employee added that it was not uncommon for workers to go entire shifts without taking a break, saying that one coworker worked 65 hours over six days. The employee said their restaurant had shifted to mostly focusing on completing orders, neglecting certain tasks like sweeping and washing dishes for the time being. The employee said many workers were looking for new jobs.

Even this yankee knows who the clear winner of the Great Sandwich War is.