Woman Who Selflessly Rescued Dozens of Pets in Florence Is Arrested for It. You Won’t Believe Why. 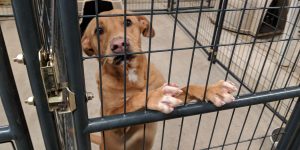 Thanks, bureaucracy. Always there when we need ya, aren’t you?

While the news cycle is almost completely dominated by the circus that is the Kavanaugh confirmation, millions of people are still struggling to recover after Hurricane Florence drenched the Carolinas earlier this month.

As usual when natural disasters strike the US, we have seen incredibly displays of kindness as communities come together and strangers pitch in to help feed, clothe, and shelter the displaced.

One North Carolina woman saw a need and filled it: dozens of displaced pets who were for whatever reason unable to accompany their people in the chaos of evacuation also needed food, clothing, shelter, and basic medical attention.

It’s the latter part of this service that got Tammie Hedges in trouble–after rescuing and caring for 27 displaced pets, Hedges has been arrested and charged with practicing veterinary medicine without a license.

Hedges, who founded “Crazy Claws N Paws” animal rescue, found herself in trouble with the law after rescuing and sheltering 27 cats and dogs while Hurricane Florence was raging according to the News-Argus of Goldsboro.

Specifically, Hedges was charged and arrested for practicing veterinary medicine without a license according to CBS News.

“We were trying to help abandoned animals,” Hedges said. “We knew North Carolina didn’t have any regulations or laws regarding shelters for animals.”

Hedges said that she had given amoxicillin to some sick animals and used a topical antibiotic ointment as well.

Of note, one of the charges Hedges faces is the solicitation of a tramadol donation. Tramadol is a prescription painkiller sometimes given to cats and dogs.

So, while it is totally fair that certain laws exist surrounding the distribution of medication to animals, but did this woman really need to be arrested? Certainly delivering babies without a license is illegal, but would anyone who helped a laboring woman in the middle of a hurricane be arrested and charged for practicing midwifery without a license?

Frank Sauls, animal services manager for Wayne County, helped spearhead the effort to confiscate all 27 cats and dogs. He also fought back against some of the negative press Hedge’s arrest was garnering.

“If we didn’t feel like anything was being done wrong, we would not have taken (the animals),” Sauls said. “But that is for the courts to decide.”

Well, I suppose the authorities knew what they were doing, but still.