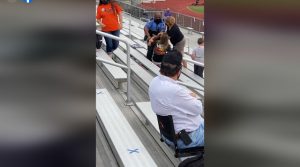 The hysteria over the coronavirus reached absurd proportions quite a while ago, but it seems folks across the country, particularly those in positions of authority, are more than willing to ratchet things up a few notches and take things to a very unhealthy, definitely tyrannical level.

A great example of this comes to us from an Ohio woman who was recently tased and handcuffed by a school officer for not wearing a mask to an eighth grade football game. Yes, you read that correctly.

People have truly lost their minds over this stuff.

The woman, identified as Alecia Kitts, was reportedly refusing to wear a mask when approached by a school security officer on Wednesday, WTAP-TV reported. The officer “appears to use a taser on the parent, before placing her in handcuffs,” the station said.

In a video shot another attendee of the game, Kitts yells “Don’t touch me!” as cheerleaders can be heard in the background. “Get off of me! I will not put my hands behind my back!”

The woman taking the video says, “This is over a mask. I don’t think he can arrest her for not wearing a mask. This is not a warning,” she says with a laugh.

Later in the video, a large woman and an officer wrestle with Kitts who yells, “This is bulls***!” Funny, isn’t the whole point of wearing a mask and social distancing to not touch other people and spread the virus? Why, then, is this officer and other individual doing the exact opposite of that in arresting Kitts?

The officer tases Kitts and she screams. The person taking the video says, “They tased someone over a mask.” And another individual yells, “C’mon! It’s just a mask!”

The incident is now being investigated.

Folks, this is pure insanity. She was completely socially distanced. Why in the world does she need to wear a mask outside when she’s not even near anyone else. This is absurd to the maximum.

This is how tyrannical people are getting over masks. Authority figures should not be arresting or tasing someone for not wearing a mask. When will this madness and fearmongering end?