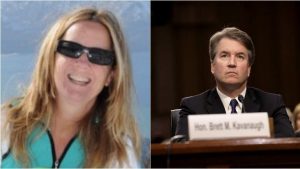 It is always so inspiring when women come forward to describe incidents of sexual abuse or assault.

Even if we have no idea if the abuse or assault actually happened.

This is essentially what a schoolmate of Christine Ford, the woman who has single-handedly put the confirmation of a Supreme Court Justice on hold, says of the accusations Ford has made that Brett Kavanaugh drunkenly held her down and groped her in 1983 and has no evidence to back up her claims.

In a now-deleted Facebook post, Christine King, who attended the same all-girls prep school in Maryland that Ford attended when the alleged assault took place, said she remembered hearing about the incident, and that although she was not personally acquainted with Ford, she admired her bravery in coming forward.

She told NPR in an interview this week however, that she actually had no idea if the incident even happened.

“That it happened or not, I have no idea,” King told NPR Supreme Court correspondent Nina Totenberg. “I can’t say that it did or didn’t.”

NPR adds that, in spite of this, “she believes Ford, noting that it is unlikely that someone would put herself and her family through such scrutiny if it wasn’t true.”

So, what do we have out of King’s inclusion in this ridiculous saga? That someone who once knew Ford has even less evidence that anything once happened but totally believes something did because why would Ford lie about it?

It’s not like the political party that Ford belongs to has their entire agenda on the line with Kavanaugh’s nomination or anything.

I mean, I have no idea if this entire thing is a political plot hatched by Democrats as a last-ditch effort to stop Kavanaugh’s appointment to the Supreme Court, but I believe it, so it’s probably true.

Isn’t that the logic?