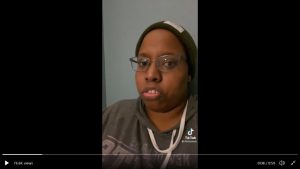 Okay, so we all know that our culture right now, especially the young folk participating in it, have been so indoctrinated with left-wing ideology on every major topic imaginable that a lot of them fail to be able to come up with a coherent, cogent thought that isn’t parroting a liberal talking point printed on a sheet of paper by their college professors.

Such is the case with a young lady who made a TikTok video stating that she’s tired of being told to “get over slavery,” going on to say those who say that should “get over 9/11,” comparing the two historic events.

A black woman created a response video on TikTok and with a cool, calm, level head, proceeded to shred this girl’s line of thinking. It’s a thing of beauty.

Who else thinks the woman in this video needs to keep on creating content and help in the battle against politically correct nonsense?

We don’t often get to catch a glimpse of someone who possesses this kind of wisdom in our modern day culture. We need more people like her to help provide the truth in a calm, rational way so that we have an opportunity to truly reach out to future generations with the truth.