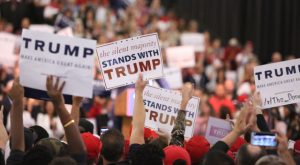 Local law enforcement in Boulder, Colorado are currently searching for a woman who allegedly assaulted a young boy who was riding his bike while holding a pro-Trump sign.

This, ladies and gentlemen, is the kind of behavior that has been fostered and encouraged by the Democratic Party who have worked tirelessly for almost four years to craft false narratives about the president and his supporters, whipping people up into a frenzy so that these acts of chaos and violence are becoming more common place.

Guess we shouldn’t be surprised that a 12-year-old boy would be punched repeatedly in the head while holding a sign like this. These are, after all, the same folks who are totally fine with murdering unborn children up to and after nine months.

“The attack happened just after noon on Monday when the boy was riding his bike northbound on Folsom Street near Glenwood Drive,” CBS4 News reported. “Police said a woman on a moped passed him and spotted the sign that he had on the back of his bike.”

The woman then reportedly made a U-turn, approached the 12-year-old boy, and then started to punch him “in the back of the head and the arms” over his apparent support for the president.

“The woman then allegedly tried to take the sign away from the boy, but he was ‘using it to defend himself against the attack,’” CBS4 added. “The boy said he was struck between four and five times and also got scratched on the arm.”

The young victim in this case described his attacker as being a white woman in her late 20s to early 30s with blondish brown hair that went past her shoulders. She was last seen wearing blue jeans, a blue shirt and a small tan jacket. The woman was riding a moped with a black seat.

“Recalling the attack, the boy told Denver7 the woman ‘just looked at me and laughed’ as she passed him before she reportedly started hitting him,” The Denver Channel stated in their report. “The boy said he was confused as the attack was happening and told Denver7 he is disappointed with people who attack others solely for their political views.”

The poor kid said he’s terrified to show his support for the president now, which is exactly what this thug wanted.

“Just don’t attack people ‘cause what she did to me – that’s not okay,” he said.

Folks, this is the United States of America. Everyone is entitled to express their beliefs freely without fear of being assaulted in the streets, even if the ideas they support seem repugnant to others, even the majority of people in the country.

The First Amendment is a critically important foundation for the liberty we enjoy, and as such, it’s essential we protect it.

Here’s to hoping this woman is caught and brought to justice.