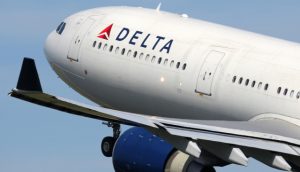 According to news reports, law enforcement in the city of Atlanta, Georgia, arrested a woman last week who seemingly went berserk, injuring multiple people on a Delta flight coming from Tampa, Florida, after she got into some fisticuffs with a fellow passenger.

Some footage of the incident obtained by ATL Uncensored, shows Patricia Cornwall standing up during the flight and ordering another passenger, an older gentlemen, to put a mask on.

The man, who has not been identified at the time of this writing, was eating at the time.Cornwall, who had her own mask down around her chin and not covering either her mouth or nose, kept demanding the man put on his mask and “stand you a** up,” according to reports from the Daily Mail.

The man replied by saying, “You put your mask down, b***h,” which caused Cornwall to reply with, “Did you just call me a b***h?”

The man said, Yes, I did,” and then Cornwall goes wild and appears to strike the man in the video.

“Now you’re going to jail,” the man said in the video, which appeared to be recorded by another passenger. “That’s assault.”

Flight crew members pulled Cornwall away from the other passenger and attempted to move her to the back of the plane.

Fox 5 Atlanta reports that Cornwall was detained by the Atlanta Police Department at Hartsfield-Jackson Atlanta International Airport after the flight landed on Thursday. Officers spoke with witnesses on the flight and Cornwall was arrested by FBI agents later that day.

And this is why so many common sense Americans are starting to refer to the permanently fear-stricken on the left as the “COVID cult.”

People have lost any sort of semblance of human decency due to the constant fear they imbibe from the mainstream media. Time to unplug.