Woman Just Scammed Trump Supporters Out of $150K. Her Response to it all is Deplorable. 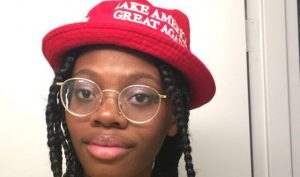 A black woman took to social media to announce she was leaving the Democratic Party in typical melodramatic fashion that captures the essence of the modern generation perfectly, claiming she was part of the “blacks for Trump” movement.

The only problem, it seems, is that her supposed defection away from the dark side — the Democratic Party — was all a big bunch of baloney.

The woman, whose Twitter bio identifies her as a “reformed Republican,” claimed to be disowned from her mother, kicked out of her house, and financially destitute over her Trump support. After posting screenshots of apparently staged text messages to showcase her hardship, she linked followers to a GoFundMe account; sympathetic Trump supporters pledged a reported $150,000 to the woman. She was later discovered to be a Trump-hater looking to rip off right-wingers in some sort of quest for “social justice” and the GoFundMe was taken down.

She openly boasted of the scam on Sunday night, “Maga bitches pay me to live.”

I will not hide any longer,, the left has made us feel as if us black republicans should hide!! but not anymore!! #BlacksForTrump #WalkAway #maga pic.twitter.com/YA0hnarxaY

“This morning is getting worse and worse,” said the tweet from the scammer. The text messages show the woman’s “mother” informing her that she will no longer support her financially or let her live at home because of her Trump support. “Maybe one of those trumpies that luv you so much can take you in,” reads one of the messages. Another says, “you’re being a f***ing c***. I have nothing else to say to you you might as well not be my daughter.”

I don’t know if these texts were originally real or not, but they were definitely not from her mum / to her pic.twitter.com/CcVoj8TOLJ

“Thank you all so much for your overwhelming support,” the scammer wrote in a tweet linking to her GoFundMe, adding that her parents had cut her off financially. “If you can find it in your hearts to help this young, black republican pay for school it would be appreciated.”

In a tweet from November 3, the woman said, “hot take: stealing from republicans isn’t bad because republicans aren’t [people].”

The woman has since exposed her little scheme online, practically bragging about it online. This type of person deserves to be behind bars.

Trump is a racist, homophobic, transphobic, bigot AND YOU THINK MY BLACK ASS WOULD SUPPORT THAT ROTTING CARROT?? ridiculous. any black person can put on that ugly ass hat and say #MAGA and yall will instantly be up their ass cuz you wanna prove so hard you’re not racist

but you are. in the policies that you choose to vote in, effectively still separating us. politicians work for the rich but you still think they’re in your pocket?? HA!! it’s such a troll-y tweet come on guys. get a fuckin grip

love to say democrats dont think but yall dont either. transphobic, racist, and sexist. just like YOUR president. anyways try to vote if you can this upcoming week. im tired of looking at these ugly ass republicans

This will come as no surprise whatsoever to those who are familiar with the left, but liberals immediately celebrated this lying thief for carrying out her fraudulent scam.

the scam of the century pic.twitter.com/u7ohL3SejB

the girl who started a gofundme pretending to be a black trump supporter abandoned by her family really hit the lick of the century. snatch that magabag tbh

Lmaooo if people believed these texts were from her mom, they deserved to be scammed

Again, if you needed any further proof that left-wingers lack a basic sense of right and wrong, this little incident ought to push you over the edge.

This woman should be charged with fraud and locked up in a cell for her deception. What an awful thing to do to other people.