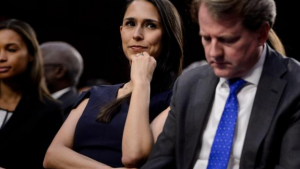 While the Kavanaugh confirmation hearings this week have been absolutely ridiculous, one notable moment has been…OK it’s hard to pick one notable moment because between screaming banshees being dragged out of the room, Cory Booker’s “I Am Spartacus” moment fail, and Dianne Feinstein pretending she knows a thing about firearms, it’s been an absolute circus.

Still, the day Woke Twitter spent freaking out over the supposed racist hand symbol flashed by lawyer Zina Bash is a likely contender for the most ridiculous moment. Again, the competition is stiff, but this is definitely in the top ten most ridiculous things about an insanely ridiculous week.

In case you missed it (in which case I envy you), Bash, while resting her hand on her arm, held her fingers in the “OK” symbol that is about as normal as the thumbs-up to any sensible person.

But Woke Twitter isn’t exactly made up of sensible people.

To Woke Twitter, this was clearly the “White Power” symbol. It doesn’t matter that white nationalists make up such an extremely minute portion of the population that no one has any idea if this is actually a white power symbol.

And it certainly didn’t matter that Zina Bash is the half-Mexican, half-Jewish granddaughter of Holocaust survivors.

Whether or not they were aware of it, Woke Twitter was owned pretty quickly when her heritage was revealed and her husband released a statement completely shaming them for their silly conspiracy theories.

And then, on Thursday…Zina Bash trolled them.

And did she ever. Right after yawning during Thursday’s sessions, she looked right into the camera and flashed the symbol.