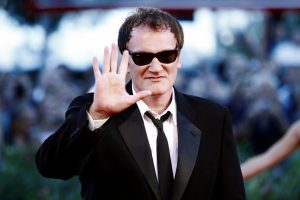 Conservatives in this society have to learn pretty quick that we can’t expect too much deep wisdom or exemplary morality from Hollywood movies. We’re paying these people for entertainment, not a sermon.

In fact, each time there’s an uproar in our camp over the content of some grossly immoral Hollywood film, I have to ask my fellow right-wingers, why are you so surprised? These people are modern-day pagans. It’s a sign of the times, sure, but let’s not have a stroke when pagans do what pagans do.

Liberals, on the other hand, haven’t developed that “different strokes for different folks” mindset. If literally anyone in the public square does not meet or exceed the criteria for being sufficiently woke or inclusive, their fangs come out.

Once in a while, though, their target righteously puts them back in their place, and it’s a beautiful thing to see.

Now, Quentin Tarantino is no choir boy, no sir. Nor has the Pulp Fiction and Reservoir Dogs creator ever claimed to be. In fact, the guy’s movies are so nihilistic, they don’t pander to liberal or conservative sensibilities. There’s a little something in there for everyone to be offended by. The dude’s an equal-opportunity shocker with little care for the tastes or the standards of the status quo.

So, when a New York Times reporter at the Cannes Film Festival tries to pin Tarantino down for having a lack of female representation in Once Upon A Time In Hollywood, the filmmaker’s latest offering about the gruesome Manson Family murder of actress Sharon Tate in the ’60s, I have to ask once more: why are you surprised?

According to The Hollywood Reporter, the NYT reporter critiqued an alleged lack of screen time given to Margot Robbie, who plays Tate and shares the screen and co-stars alongside Brad Pitt and Leonardo DiCaprio.

“A reporter suggested that Robbie, an Oscar-nominated actress who has far less screen time than her two male co-stars and few lines in the film, was underused. To that, Tarantino, looking visibly annoyed, answered curtly, ‘I reject your hypothesis.'”

Oh my word. I would have paid good money to be in the room to hear that sharp, simple clapback.

Then, seemingly unimpressed by the reporter’s attempt to “liberate” her, Robbie herself spoke up:

“I think the moments that I got onscreen gave an opportunity to honor Sharon and her lightness. I don’t think it was intended to delve deeper. As Brad mentioned, I think the tragedy was ultimately the loss of innocence and to show those wonderful sides of her could be done quickly without speaking, and I did feel like I had a lot of time to explore the character event without dialogue.”

It’s a film about the events leading up to the murder of Robbie’s character. These are historical events. It’s one thing to gripe about the lack of female representation in a work of fiction (although I’d even argue the validity of that complaint even in that circumstance). To complain that historical events cause a female character only have so much representation in the storyline is the height of asininity.

Believe it or not, some critics at the Cannes panel even had the gall to criticize the film for depicting “rage against women”. In a historical film about a shocking murder that involved a woman. Again, why are we surprised?

The dude might be some kind of a sick genius, but kudos to Tarantino and his cast for not caving to the ultra-woke pressures of Hollywood.