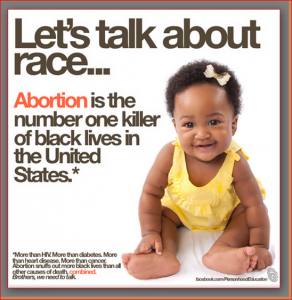 “Woke” is a slang term that is easing into the mainstream from some varieties of a dialect called African American Vernacular English and is increasingly used as a byword for social awareness.

Sadly, many who are publicly proclaiming they are “woken women” on social issues are still in the dark about how much Black Lives Really Matter.

In 2016, in an effort to encourage support for Black Lives Matter in Charlotte, North Carolina, the president of Planned Parenthood, Cecile Richards, sent this message on Tweeter to leaders of the group:

“Everyone must own the responsibility we have as a nation to stand against the violence being done to black people in America.

This single organization is the greatest perpetrator of violence against Blacks in America. It’s founded on racism, perpetuates racism, and kills more than 850 black Americans every day in their would be mother’s wombs.

Since 1973, abortion has reduced the black population by over 25 percent. Twice as many African-Americans have died from abortion than have died from AIDS, accidents, violent crimes, cancer, and heart disease combined. Nearly 20 million black babies have been aborted since Roe v. Wade.

80 percent of abortion facilities are located in minority neighborhoods. About 13 percent of American women are black, but they receive over 37 percent of the abortions. ( https://blackdignity.org)

Black American, Walter Hoye II is a licensed and ordained Baptist preacher who serves as both President and Founder of the Issues4life Foundation, the California Civil Rights Foundation, Founder of the Frederick Douglass Foundation of California, Core Member of the National Black Pro-Life Coalition. Hoye notes that “between 1882 and 1968, 3,446 blacks were lynched by the Ku Klux Klan. Today, abortion kills more black Americans in less than three days than the Klan killed in 86 years! Think of it.

“American blacks make up thirteen percent of the U.S. population, yet thirty-seven percent of all abortions are performed on black women. This is because eugenic-minded pro-abortion forces target American blacks by putting abortion clinics in black neighborhoods,” according to Hoye.

The late Mother Teresa of Calcutta stated at the National Prayer Breakfast in Washington, D.C., February 3, 1994, with President Bill Clinton, and his wife, Hillary, in attendance: “The greatest destroyer of peace today is abortion, because it is a war against the child, a direct killing of the innocent child, murder by the mother herself, and if we accept that a mother can kill even her own child, how can we tell other people not to kill one another? …” She went on to say: added:  “Any country that accepts abortion is not teaching its people to love, but to use violence to get what they want.”

The founder of Planned Parenthood, Margaret Sanger, was a racist who wanted to use abortion as a tool to bring about a white supremacist agenda.

She wrote, “We do not want word to go out that we want to exterminate the Negro population.”

“The purpose of the American Baby Code shall be to provide for a better distribution of babies … and to protect society against the propagation and increase of the unfit.”

“Feeble minded persons … and others found biologically unfit by authorities … should be sterilized or, in cases of doubt, should be so isolated as to prevent the perpetuation of their afflictions by breeding.

She said there must be an “elimination of ‘human weeds’ … overrunning the human garden … and for the sterilization of genetically inferior races.”

Among her many goals was that, “No woman shall have the legal right to bear a child … without a permit.”

As journalists, Denise C. McAllister observed: “Clearly, if anyone should “stop killing black people” it’s Planned Parenthood. The real violence against minorities in America isn’t on the streets of Charlotte or any other city, it’s in the clinics of Planned Parenthood.”

Alveda King, niece of Martin Luther King Jr., and founder of the National Black Pro-Life Coalition said, in an interview in December of 2016 on the politically conservative American news and commentary CNSNews.com.: “Abortion is … designed for population control … The numbers are higher in the African American community, so that’s certainly black genocide … We also discovered that once black people are made aware of the genocidal eugenics by abortion that the community will speak out.”

“The killing tools of abortionists are as aimed at blacks today as the fire hoses of segregationists 50 years ago. Taking more African American lives than gun violence, heart disease, cancer, and AIDS combined, abortion seems to have targeted blacks in a way that can only make remaining Ku Klux Klan members smile.”

“The connection between abortion and racism is not surprising,” she continues. “Both are based on the lie that certain people are somehow not fully human.”

Today, January 22, 2018 is the 45th year since the Roe v. Wade decision, and since 1973, 60 million children have been killed. Abortion is our nation’s greatest shame, our most painful tragedy.

Women of the world, especially black women, it is time to be truly “Woken”! The liberated, relativistic, evolutionary, god-playing humanist of today are attempting to seize the controls of history through legalized murder and eugenics, and black persons are hardly in the plans!

President Ronald Reagan wrote in his article, “Abortion and the Conscience of the Nation,” The Human Life Review, 1983: “… we cannot survive as a free nation when some men decide that others are not fit to live and should be abandoned to abortion.”