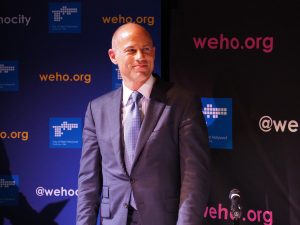 Michael Avenatti really gets around!

How does he find the time?

That’s a whole lot of cray-cray in one case, yeah?

“The co-conspirator in that matter is attorney Mark Geragos, two people familiar with the matter said,” the Wall Street Journal reported Monday. “According to the complaint filed in New York, Mr. Avenatti and Mr. Geragos, the alleged co-conspirator, met with lawyers for Nike in New York on March 19 and threatened to release damaging information unless the company agreed to pay the two lawyers millions of dollars and another $1.5 million to the client Avenatti claimed to represent.”

Geragos, who is currently representing “Empire” star Jussie Smollett who has been charged with staging a fake hate crime against himself, has also represented Michael Jackson and Scott Peterson. Oh, and Colin Kaepernick.

Mark Geragos has represented Jussie Smollett and Colin Kaepernick, who recently settled with the NFL for less than $10 million. https://t.co/O7TDnCQZNF https://t.co/z9F3RNnZPY

So, let me get this straight. The lawyer representing the football player who poured fuel on our nation’s race relations by kneeling during the national anthem was blackmailing the company that gave the football player millions to help them sell shoes?

As well as the black guy who staged a fake hate crime against himself?

AND the most famous celebrity pedophile of all time?

This is all too much.

Well, at least Michael Avenatti has found some friends who are as crazy and money-hungry as he is, and that can’t be easy to do!