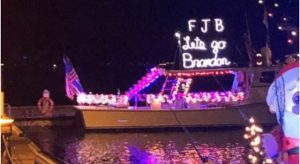 A boat that was decorated with several popular anti-Joe Biden slogans has now been stripped of its “Best In Show” title not long after the Virginia contest was held. The reasoning for the pull? Apparently, the boat and its messages were “too political.”

Wonder if the same thing would have happened to a boat that had a Black Lives Matter theme going on? Just a little something to think about.

Bill Berger captained the winning vessel during the Yorktown Lighted Boat Parade over the weekend, which featured a display that included several large lighted signs that stated, “FJB” and “Let’s Go Brandon.”

“When we left, we were declared the winner,” Berger went on to tell local reporters for WTKR.

“[Then] 48 hours later it was stripped from us, and I think it’s from pressure,” the boat’s captain said.

A member of the Yorktown Foundation board of directors issued a statement saying the boat had been disqualified “because its political statements were at odds with the mission of the Foundation.”

“As a 501(c)(3) organization, the Yorktown Foundation and its sub-ordinate groups are apolitical,” board member Dr. Walt Akers went on to reveal in a statement.

“On December 4th, 2021, several members of the Foundation’s Board of Directors were made aware that a boat with an overt political message had participated in the Yorktown Lighted Boat Parade, and that the judges had awarded it first place. In discussions with the event organizers, they explained that they were equally perplexed that the boat had won and they took immediate corrective actions,” he continued.

Berger said he had been clear on his parade entry application that his theme would be “Let’s Go Brandon.”

“I think our message got across,” Berger said during his chat with WTKR.

“We have a horrible president. Is [the phrase] inappropriate? In today’s world, I don’t think so,” Berger added.

Akers admitted to WTKR that Berger’s boat earned loud cheers from a large crowd. He added that he didn’t think the judges at the time knew what the message meant.

“It was very well lit, it was a beautiful boat,” Akers said when speaking with WTKR. “The guy did a great display. If it wasn’t just for this political issue, I think the guy would have had a very good chance. The crowd was very responsive to it, and I think it’s possible the judges may have responded to the crowd activity.”

It’s true, folks. The left is trying their best to not only silence those with political opinions different from their own, but they are desperately trying to suck the fun out of every aspect of life possible. How miserable it must be to live life as a Democrat.