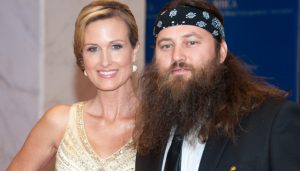 Star of the pop culture phenomenon, “Duck Dynasty,” Willie Robertson, recently spoke with the media where he said that his family was the victim of a drive-by shooting that saw eight to ten shots fired at his estate from the road in his home town of West Monroe, Louisiana.

What’s truly terrifying here is that one of the bullets fired at his home went through the bedroom window of the house where his son, John Luke Robertson and his wife and infant son are staying. No one was injured in the incident.

“We were pretty shook up,” Robertson said in a Sunday interview with USA TODAY Network. “It looks like they were just spraying bullets across my property.”

The property and houses on it are behind a fence and gate and located far off of the road. No arrests have been made.

Robertson said multiple witnesses saw the truck in which the suspects were riding pass by the property at least once before firing the shots at 2:33 p.m. local time.

“It was broad daylight,” Robertson said.

Robertson stated that he thinks the shooters in this incident were well aware of the fact they were shooting at his property.

According to Robertson, many members of the family are currently staying with them amid the coronavirus crisis, including his daugter Sadie and her new hubby Christian Huff.

“Nobody was outside at the time, but everybody had been out about five minutes before,” Robertson said. “I had just gone to the store when it happened.”

This is truly a terrifying experience for the Robertsons. Here’s to hoping those responsible for this are brought to justice immediately.