Whose Bright Idea Was It To Do An Anti-2nd Amendment Version Of “Oklahoma!”? 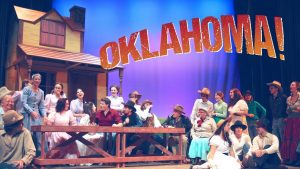 Ahh, the theatre. When you’ve got an itch that can’t be satisfied by anything but the most condescending, pretentious, agenda-injected entertainment, where else can you go but Broadway?

While performing arts have long been the domain of urban liberals and socialist socialites, this latest Broadway offering truly takes the cake: a revival of Rogers and Hammerstein’s Oklahoma!, but with a markedly anti-gun, social justice-demanding twist.

In director Daniel Fish’s pretentious production — which opened Sunday on Broadway, fresh from Brooklyn’s St. Ann’s Warehouse — everything you cherish about this classic has been taken out behind the barn and shot, replaced by an auteur’s bag of tricks and a thesis on gun control and westward expansion. Here, the West was won by a culture of violence and toxic masculinity — what fun!

It turns out the only people who enjoy a finger-shaking lecture about guns and toxic masculinity are, well, members of the echo chamber who are actually concerned about those things, and I’m betting there ain’t enough of those to buy tickets and save this flop.

Of course, if you’re going to have a contrived, anachronistic plot, you could at least salvage the show with phenomenal acting and production. But, in the case of this Oklahoma!’s lackluster dialogue, dancing, and seizure-inducing lighting, the whole thing was more of a “joyless chore” than a riveting performance.

What else do we expect from a gaggle of East Coast elitists putting their revisionist spin on Westward expansion?

But in putting his actors in modern dress, making guns his wallpaper and forcing every moment that a gun is brandished or even mentioned to have bombastic significance, Fish clearly is saying he’s not a great fan of the culture of the Great Plains — of yesteryear or yesterday.

In a preposterously heavy-handed sequence, he even has Jud present Curly with a pistol, rather than the usual knife, which leads to a shocking but inane conclusion. All this, in a hokey old show that includes the lyric, “Gonna give ya barley, carrots and potaters.” Listening to the New York audience applauding their own virtuosity makes a guy want to put this “Oklahoma!” out to pasture.

As the left continues to try to revise history, tear down statues, and vilify historical figures without care for their cultural context, it sure is fun to watch them faceplant once in a while.