Who’s Looking Out of Your Mirror? 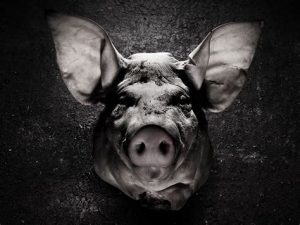 Last week, America reacted as one people to the loss of life and innocence in Parkland, Florida. Finding common ground is what we do when nothing else makes sense. We rarely stand on it for very long, and we too quickly forget that connection, but it’s always there before we begin that most important part of dealing with a national tragedy – pointing fingers and assigning blame.

Many Americans believe the rise in mass shootings over the last decade is a cancer, rotting away the soul of our nation. The reasons for its spread, we’re told, are many – the NRA, the Democrats, the Republicans, former President Obama, President Trump, the Russians, aliens (both illegal and extraterrestrial), the leftists, the KKK, the FBI, and the CIA, to name just a few. Some are accurate. Some are crazy. Some will probably shock us all one day.

Violence, however, is not the illness. It’s the fever caused by a virus. It’s the hacking cough of diseased lungs trying to clear themselves of infection. It’s the puss leaking from a wound allowed to fester. It’s only the symptom of the sickness which is, indeed, destroying the spirit of our people.

The simple solution is to pass more gun laws. At first glance, this answer seems to be a good one. Words are specific. Unlike people, we can craft them into sentences that serve as specialized tools designed to accomplish a precise purpose. Want a particular outcome? Write a law making that behavior mandatory. In addition to handling the problem, everybody gets to feel good because we’ve DONE something.

Except rarely, if ever, is the easy answer a good or even an effective one. At best, passing additional laws restricting gun ownership and use is an emotional salve. Not until he’s formally charged will we have an idea how many laws Nikolas Cruz broke last week, but we know the number will be large. New laws will only make the list longer when the next mass murderer stands before a judge, and taking the easy road guarantees it will happen again. Gun control enacted in the wake of a school shooting isn’t about protecting children from mentally disturbed killers or their bullets; it’s about protecting the adults from ourselves.

Despite the memes, jokes, and sarcastic comments to the contrary, even the most committed gun-control activists don’t believe guns jump up and kill people. New laws are demanded to make THEM, those bad people who make us unsafe – behave. THEM might be gun owners, or THEM might be those who want to take guns away. The important thing is that blaming THEM allows us to feel good about treating symptoms without ever confronting the disease.

William Golding’s 1954 novel, “Lord of the Flies” tells the story of a group of school boys marooned on an island. With no adults to teach them not only how to be civilized but why civilization is necessary, the boys turn to chaos, paranoia, and murder. They collectively create a mystical beast to explain their fears and their innate sense of wrongness.

Jack, leader of the hunter tribe, plants the head of a slaughtered boar on a stake. He tells his followers it’s a sacrifice to the beast in an effort to calm their fears. The boys, however, as well as many readers through the years, dread the fly-covered mass of bone and rotting flesh as if it were the evil they claim to hate. Only one boy, Simon, understands that it’s nothing more than a dead pig’s head on a stick; the evil is in the boys. They are, themselves, the thing they most fear.

We have created the very situation Golding wrote about. By allowing right and wrong to become relative to circumstances and beliefs and allowing each person to claim his or her own truth, we are becoming a society of savages. Without change, only the strongest, most brutal hand will be able to maintain order. If that sounds extreme, how would we have reacted even twenty years ago to school shootings becoming a common occurrence?

For at least two generations now, Americans have failed at being adults. Whether because of success, laziness, emotional need, arrogance, or ignorance, we have not provided the basic skills and hard lessons our children need to become mature adults who put the needs of others ahead of their own and move society forward. Our children shoot each other down while we surround ourselves with bloody animal heads planted on stakes. For our grandchildren and their children to live in freedom, we have to admit our shortcomings and face our fears.

Government isn’t the problem. Neither are Democrats or Republicans, gun owners or activists. We are the beast we claim to hate, and every day we face a decision – do we look into the mirror in search of our children’s future, or do we send them off to kill each other? We have to make better choices.

Roy Jeffords is an author, ghost writer, Constitutional conservative, and curmudgeon-at-large. A graduate of The Citadel, the Military College of South Carolina, he lives in Texas with his wife and their two boxers. Find him on Facebook at Roy Jeffords, Twitter @royjeffords, and Instagram royjeffords. Contact him at [email protected]