Whoopi Goldberg: Soldiers Fight For Our Right To Impeach Trump 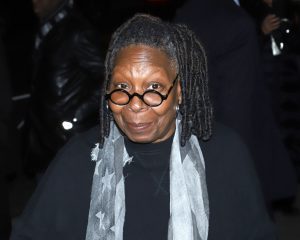 Where would we all be without liberal celebrities to guide us?

Probably a lot better off, honestly.

In a logic-defying rant on The View, however, co-host Whoopi Goldberg enlightened her fellow Americans to the dubious fact that, among other things, soldiers and Founding Fathers have fought for the right to impeach President Trump.

Because apparently the politically-slanted, multi-pronged attack on a democratically-elected president is exactly what the Constitution and those who drafted and defended it had in mind.

“This is not a funeral,” Goldberg began. “Listen, you have to go pretty hard to destroy us. You have to do it really hard to destroy this country, but there are too many people who fought too hard for too long to let that happen, and that’s why we are celebrating the Constitution. We are celebrating our rights as Americans to say something’s wrong.”

“They fought for our right to say, ‘You can’t do it this way.’ We have a whole list of stuff that you’re supposed to follow.”

Not exactly sure what the “whole list of stuff” is or exactly what Trump has done that has violated the terms on said list, but okay.

For her part, Goldberg at least tried to temper her disdain for the president by calling for solemnity through the impeachment process.

“So, before we went on the air this morning, House Democrats made it official and laid out the articles of impeachment against You-Know-Who,” Goldberg continued, prompting cheers from the audience.

“No, no, this is not a celebratory moment,” she said, shushing the audience. “This is not a good thing.”

Now, let’s not throw the baby out with the bathwater.

Goldberg is 100% correct that America was founded on principles of rejecting and rooting out illegitimate and abusive authorities, even in our nation’s highest office. It is one of the incredible aspects of our government that helps to prevent us from becoming a dictatorship.

What Goldberg and her leftist harpy co-hosts is too blind to see, and what our Founding Fathers may not have foreseen, is that totalitarian leftism has metastasized in this nation, allowing for no dissenting thought, speech, or policy. President Trump has committed no offense, he is merely an unsavory political adversary.

Don’t mock our Constitution by comparing this farce to the checks and balances built into our government.