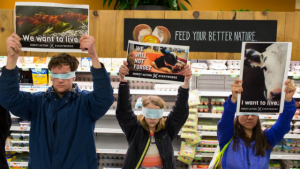 While most people probably think of Whole Foods shoppers and militant vegans as being in the same category, one vegan activist group has been holding disruptive, in-store protests in the bougie health food chain for years due to what they believe is a false claim to have “cruelty-free” animal products.

The group, Direct Action Everywhere, has done things like hold funerals for chickens, sit-ins with cow crates, and interrupting store ribbon cuttings, according to The Blaze.

Now, a Berkely, California Whole Foods has been granted a restraining order against DxE just before a protest they had planned in the store this coming week.

DxE member Cassie King told KPIX, “It’s interesting that Whole Foods tries to paint us as a danger to the public, when we believe what we’re doing is actually a public good.”

She continued, “In terms of breaking the law, we see it as establishing the right to rescue and the right to know for every customer who wants to shop at Whole Foods to actually know what’s happening to these animals.”

The group is famously provocative, with members racking up long rap sheets for everything from felony theft of animals (which they call rescues) to criminal trespass (such as chaining themselves to animals and refusing to leave).

It’s interesting that this group things the customer has a right to know what’s going on with the animals, but somehow doesn’t have a right to simply shop in peace.

They assume customers are interested in anything other than delicious meat that has some sort of bougie markup like “free range” or “hormone free” at exorbitant prices.

I mean, that’s why people shop at Whole Foods, right?

Look, free speech is awesome and these vegans have every right to make their kooky nonsense available in print or on the interwebs.

But Whole Foods customers have a right to shop at a business that has a right to ban kooky protesters from their store.

That’s what’s great about America–no one is stopping DxE from being kooky vegans, but they don’t get to force people to join their little cult. Or block their path to the overpriced free-range, hormone-free, fed-with-fairy dust Amish-raised chickens in the frozen foods aisle, either.