Who Is In Charge Here? 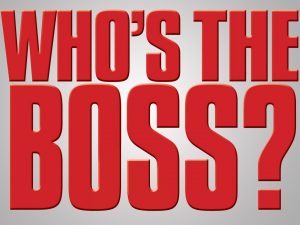 On Sunday, July 16, 2017, appearing on CNN’s Reliable Sources, Carl Bernstein, a flaming leftist and dyed in the wool Trump hater, who along with Robert Woodward, broke the story of Watergate for The Washington Post,  claimed, “We are in the midst of a cold civil war in this country, a political and cultural civil war, and all of our reporting is taking place in the context of that cold civil war. And nothing quite like that existed at the time of Watergate.”

Rush Limbaugh said what Bernstein was really saying was, “We’ve lost our monopoly in the media! Now there’s other people out there contradicting what we say and we don’t know how to deal with it and so we have a media civil war, too. So Bernstein basically admits that the Drive-Bys are at war. We’re in a civil war. It’s a civil war in the media. And they are at war with Trump and his supporters.”

Carl Bernstein was inadequate in his assessment of the size of the war. The reality is that the “Mother” of all battles is raging all around us and all over the world. Although the battle may have intensified, it’s not new; in fact it’s been going on for millennia. The central issue of human history for which this battle is being waged can be summed up in one question, “Who is in Charge Here?”

From this one question erupts a plethora of others: Is it man or God” Is it Big Government or an Omnipotent God? Is it Satan or the Savior? Who rules in and over the earth? Who owns you — the State, Satan, self, or the Sovereign God?

What difference does the issue of who is in charge, or sovereign, make in a person’s life? It makes a great deal of difference because that which is sovereign in an individual’s life is the source of the flow of power and force of that person’s self-government. Combine enough individuals and you make a nation. The same truth applies to nations as well as individuals because what is sovereign in the life of a nation is the source of the flow of power and force that manifests itself as civil govern­ment. That which exercises sovereignty in the nation’s affairs con­trols its policies, sets its standards, colors its laws (and the spirit and enforcement of those laws), regulates its economy, determines the governmental course of action, and is “the master of its fate.”

The Three Views of Who’s in Charge:

As a Christian, if you see Satan as ruling the earth, then you understand your job assignment to be that of saving a few souls from this evil world that has gone to the devil. You see Christian culture as a persecuted minority that has no hope of changing society. Christian activity is viewed as something you do in the church or in private devotions. All else is viewed as secular. You think that it is fruitless to become involved in politics because after all these things were prophesied as coming to pass. You tend to live like the words of the hymn, “Just a few more weary days and then you’ll fly away to Heaven.”

If you see man as ruling the earth, then you feel free to do whatever you please since man is autonomous. You see Christian culture as hopelessly out of date. You view matter as the ultimate reality and see yourself as a product of chance. Your hope lies in the biggest, most powerful thing you know, civil government. You must have a government big enough to predict all things, plan all things, protect all things, provide all things.  After all, man is god and one man isn’t big enough, so it takes a conglomerate of them to carry out their divine duties. Big government’s theme song is, “Might makes right!”

Famous and infamous, author, Ayn Rand, a self proclaimed atheist at the age of 14, saw man as ruling his own little world. She proclaimed, “And now I see the face of god, and I raise this god over the earth, this god whom men have sought since men came into being, this god who will grant them joy and peace and pride. This god, this one word: I” (Ayn Rand, Anthem).

Tom Gilson, writing in The Stream, said, “What else besides a claim of godhood is going on, after all, when a man declares himself a woman, insists that his new sex (“gender”) is reality, not only for himself but for everyone else? What else explains his demand that everyone kneel in obedience to the new reality he has created?”

Tom went on to write, “Many of today’s self-deified gods, in contrast — and quite ironically — insist there are no gods. They call themselves atheists, but the name can’t hide the fact that they’ve taken it upon themselves to do a god’s work, with a god’s prerogatives.”

GOD IS NOW RULING THE EARTH!  If you properly understand this, you see your task as a co-partner in the Family business of Almighty and Sons/Daughters, as that of subduing the earth and building godly nations through the evangelizing and discipling of its inhabitants. You view every area of life as sacred. Every activity of life is spiritual. Every aspect of life is to be brought under the Kingship of Christ. You see the self-governing Christian obeying the Word of God and participating in governing in the home, the church, civil government, the marketplace, and the school.

The God of the Scriptures is the Creator, the Controller, and the Consummator of history. No event preceded the exercise of His will and none will succeed His determinate counsel. His rule is not subject to the voter’s ballot, the assassin’s bullet, nor the alluring bribe.

When we settle the issue of “Who’s in Charge? Then we know that we aren’t owners of anything, but stewards of all that is deposited in the garden of our assigned work to cultivate. “Stewardship,” or “house-management skills,” is the practice of learning to manage in a systematic, productive and profitable manner the assets and opportunities Father God has entrusted us with. It is a divine-human partnership in the Kingdom firm of Almighty and Sons, with Father as the Senior Partner.

Who is the “Big Boss” of Your Life?