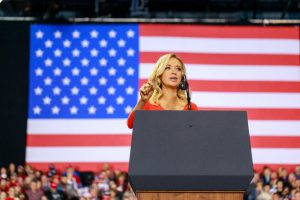 White House Press Secretary Kayleigh McEnany has been receiving a lot of questions concerning whether or not President Trump is planning to hold some sort of address about the the riots, protests, and death of George Floyd. However, McEnany has been pushing back on calls for the president to do that, noting that Trump is committed to action and that an Oval Office address wouldn’t stop Antifa.

President Trump has blamed much of the violence on the work of Antifa, a radical left-wing group, stating that the administration was on the cusp of labeling them a terrorist organization.

McEnany, during an interview with “Fox & Friends,” said the president has “taken extraordinary action” — noting the activation of the National Guard in more than a dozen states and the Trump administration’s move to designate Antifa as a domestic terrorist organization (despite disputed authority to do so).

“This president has been very clear that we need law and order in this country,” McEnany said, adding that violent protest “demeans the peaceful protesters who have a legitimate grievance when we see angry mob mentality take over and those horrific images of businesses burning and fires in the streets of this country.”

When asked whether the president would address the nation amid the unrest, McEnany responded: “A national Oval Office address is not going to stop Antifa.”

According to McEnany, there needs to be more action taken against those inciting all of this violence rather than speeches, stating that Trump is “committed to acting on this.”

While the Trump administration has been pointing the finger at Antifa, local authorities have blamed white supremacists, gangs, and all sorts of other outside influences for the chaos that is consuming their cities.

At the end of the day, let’s hope the president takes some course of action that helps put out the fires, figuratively speaking, and helps calm folks down a little before the whole country is a pile of ashes.