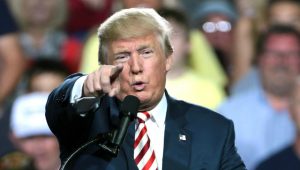 As most American citizens are locking themselves down in their homes to help flatten the curve of the infection of the coronavirus spreading across the country, the White House is looking to pump billions into the economy as a means of helping to keep things afloat during this unprecedented time.

In fact, both the White House and Congress have already moved with rapid pace to push through two coronavirus spending packages, but President Trump is currently working on a third stimulus spending package of $850 billion that will take the form of mostly tax relief measures.

“Roughly $500 billion of this would be tied to a payroll tax cut, while $250 billion would come in the form of Small Business Administration loans and another $58 billion would be directed to the airline industry, among other measures,” reports Fox.

Late Monday, Trump posted a statement on Twitter assuring Americans that the government would “powerfully” support domestic industries hit hard by the coronavirus. “The United States will be powerfully supporting those industries, like Airlines and others, that are particularly affected by the Chinese Virus. We will be stronger than ever before!” he wrote.

“The $850 billion package would come in addition to another roughly $100 billion package that aims to provide paid sick leave for impacted workers, though the details of that legislation remain very fluid as it moves through Congress,” The Washington Post reported.

“Again we’ll be speaking to the Republicans at lunch tomorrow about the bill but we look forward to them taking it up and passing it,” Mnuchin told reporters. “But we got a lot more work to do and the main reason why we’re here tonight was talking to the Senate about other bills that they’re going to work on ASAP.”

There’s no doubt going to be very mixed opinions and thoughts on these large stimulus bills and how they are to be funded and paid for, but at the same time, if we want to keep the economy from collapse during this time, something needs to be done.

The real question is whether or not we’ll really be able to get back to normal over if things will always be a bit different in America going forward?

Guess we’ll have to wait and see how it all plays out.