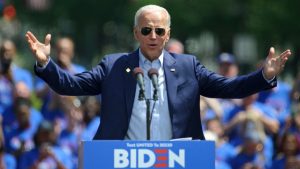 The White House is now reportedly weighing a potential trip to Europe for President Joe Biden as the war between Russia and Ukraine continues to rage on.

The trip, which would be focused on the Ukraine situation, might include a stop in Brussels, which is the home of the European Union and the headquarters of NATO.

The West Wing discussions coincide with similar talks to send first lady Jill Biden to the region as part of her East Wing outreach to her counterparts, such as Polish first lady Agata Kornhauser-Duda.

Harris also returned this weekend from another swing through Poland and Romania. The second trip was marred by public relations missteps, such as a viral video of her awkwardly laughing during her joint press conference with Polish President Andrzej Duda when the pair were confused about who would answer a reporter’s question first.

President Biden last spoke with Zelenskyy last Friday as the United States continues to wrestle the logistical challenges presented when attempting to provide Ukraine with security, humanitarian, and economic assistance.

Russia has made threats as the nation perceives the deployment of Polish Soviet-era MiG-29 jets to Ukraine through U.S. Ramstein Air Base in Germany as an escalation of the tension in the conflict.

Zelenskyy himself is scheduled to speak to Congress on Wednesday after American lawmakers approved $13.6 billion in aid for Ukraine last week.