While We Wait For Ilhan Omar To Apologize About 9/11 Comments, The New York Post Sets Her Straight 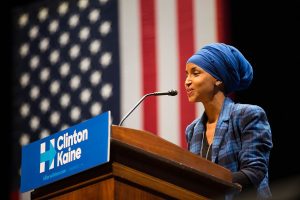 Rep. Ilhan Omar was certainly playing stupid games when she not only refused to condemn the 9/11 tragedies as terrorist attacks, she minimized them and referred to them as “some people did something” and proceeded to justify the establishment of an organization that is, at best, terrorist-sympathetic here in America:

Come on, Ms. Omar. “Some people did something”? I wonder what would happen if today’s German government ever tried that kind of nonsense. No, we don’t minimize and shrug off atrocities like terrorism and genocide in order to move on with our progressive agenda. That’s not nice.

So, what was Ms. Omar’s stupid prize for downplaying the single deadliest terrorist attack on U.S. soil? Oh, nothing major, just a little re-education via the front cover of the New York Post:

Kind of hard to shrug off the image that defined terrorism for an entire generation of Americans when it’s looking you right in the face, isn’t it?

Texas Rep. Dan Crenshaw was just one of the sheer masses of people from all political persuasions who criticized Rep. Omar for the carelessly crass way she discussed 9/11. However, although all Rep. Crenshaw did was paraphrase her comments and remark that they were “unbelievable,” this was apparently a gross violation of her safe space akin to demanding her head on a spike:

This is dangerous incitement, given the death threats I face. I hope leaders of both parties will join me in condemning it.

My love and commitment to our country and that of my colleagues should never be in question. We are ALL Americans! pic.twitter.com/foTZMpiZKv

Crenshaw’s response, classy as ever, seemed to have shut her up, if only momentarily:

1. I never called you un-American.

2. I did not incite any violence against you.

3. You described an act of terrorism on American soil that killed thousands of innocent lives as “some people did something.”

It’s still unbelievable, as is your response here. https://t.co/SsfWYepOS1

And, our beloved New York squawker Rep. Alexandria Ocasio-Cortez condemned the New York Post for printing such a “triggering” image and calling out Omar:

Rather than have an ounce of consideration for how “triggering” Omar’s original comments may have been, AOC instead suggests that The Post’s cover was, aside from being an attack on “progressive women of color”, offensive and damaging to the delicate little sensibilities of New Yorkers who still remember the 9/11 attacks.

Well, buttercup, as a New Yorker myself, I can assure you that seeing that horrific image didn’t “trigger” me or revive any trauma from when I sat in my sixth grade reading class hearing our principal announce the attacks over the loudspeaker. Nope, not a bit. The only upsetting thing here is Omar’s cavalier attitude toward terrorist attacks, her ardent defense of terrorist organizations, and the vomit-inducing willingness her party continues to demonstrate to defend every statement she makes.

New Yorkers are known for a lot of things, but never say we aren’t tough. We can handle seeing the towers ablaze. We’re very intimately familiar with this sight; it’s not going to break us.

The image used in The Post’s retaliatory cover is an icon of our modern history, and they shoved it right in the face of someone who dared to gloss over what happened. I just wish I could shake hands with whoever gave the cover the green light.