Where were the Russians 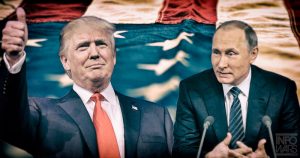 On Tuesday of this week citizens of the states of Virginia and New Jersey headed to the polls to cast their ballots for Governors. There was fanfare on both sides of the political spectrum as the Democrat left was looking to stem the tide of election losses and Republicans were looking to deliver the knockout blow to the opposition party.

In all of this I have one question. Where were the Russians?

You heard me right.

In all of this I go back to my original question. Where were the Russians?

Check out The Conservative Cartel. www.facebook.com/theconservativecartel

The Democrat left has been screaming from the rooftops for the past 12 months that Trump colluded with Russia and that the election was tainted.

Then I ask. Why didn’t Russia collude with the Republican party this time? Why only the general election? If the Russians wanted Trump to win why not help candidates of the same party win?

Why isn’t the left talking about Russia now that they won?

If there is a Russian connection to our elections and they did spend all of that money on Facebook ads, why didn’t they do that this election?

It’s a relative question to ask.

If you go by the left’s rationale, the Russians pick and choose what candidates they want in office here in the United States. How could you come to any other conclusion?

Yet, here we are. Democrats finally won an election. All of the talking heads on the left are elated that their candidates won.

I want to break this down just a bit. Virginia voted for Hillary over Trump by a 6 point margin. Northern Virginia is just a suburb of Washington, D.C. The candidate that the Republican party ran was a RINO (Republican in Name Only). Was anyone on the right surprised at this outcome. If they were they should pay better attention.

Along with that you had a race for Governor in New Jersey. With Chris Christie stepping down and the whole bridge-gate issue, once again was any common sense thinking person surprised when a very blue state in New Jersey went to a democrat. The short answer is no.

Here are the take aways from these elections.

First, Voters on the right are tired of voting for candidates that don’t believe in Making America Great Again. We’re fed up with the swamp in Washington, D.C. We are tired of listening to candidates say they will do something on the campaign trail and then have amnesia when they show up for their jobs. Ed Gillespie was a RINO. Plain and simple and the republican that ran in New Jersey I don’t even know his name.

Conservative voters want candidates of character. They want leaders not followers. They want action not reaction.

The Russian collusion story is dead. Even the left can’t sell it after the elections this week.

It’s time to put up or shut up Republicans. What’s it going to be?