When They Call You Racist 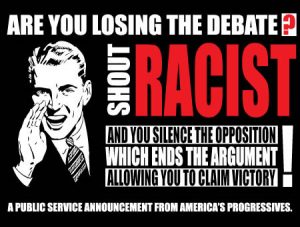 I denounce racism in all its forms. It is a sin abhorrent to humanity.

Today everyone seems to be tossing that word around way too freely. If someone disagrees with your political opinion or they simply don’t like you then you must be a racist. There’s no logic, no proof, no basis. Just…racist.

Racism has become the current insult du’jour. Here is the logic: If I don’t have the ability to debate the person with whom I disagree then I must by all means resort to one final tactic. I must characterize them with a term that I know everyone hates. Thus your opponent becomes a sexual harasser, or a nazi, or a racist. You just placed upon them the burden of escaping the accusation and guilt. That gets tricky.

If a person is an actual racist then it should be easily proven. Their words and actions have defined them beyond doubt. They should be properly defined as such, rebuked, and corrected.

Let me be clear. I’m not talking about stupid things said or done mistakenly, purposely, or even in jest in one’s past. That’s not racism. Those are occasions of immaturity and ignorance. We have all had them. Just ask Bill Maher. To say otherwise about yourself is a lie and you know it. Maturity demands that we move past that ignorance and into a more considerate and intelligent way of thinking and behaving. We all must put away childish things.

If you call someone a racist without proof or cause then you yourself commit a sin that is equally atrocious as racism itself. You have vilified someone and made them guilty without proper cause. You have no true basis with which to judge them. In fact, you have diminished the actual hideous reality of true racism that does indeed, unfortunately, exist in the hearts of some. Your intended classification of an individual as racist where no racism exists actually lessens the importance of the word.

I get called a racist every day by those that wish to politically disagree with me or engage me in debate. Why? There’s no proof of that accusation. Just assumption. I am a white heterosexual Christian male of southern heritage with strong opinions that happens to lean towards conservative politics. Does that make me racist? My Jewish business manager, Hispanic entertainment agent, and African-American IT manager don’t think so. But be your own judge.

Let’s get to the heart of racism.

How many “races” of people are there” in the world? There is only one – the human race. For those of you that consider yourselves Christians I’ll remind you the Bible does not use the word race at all in reference to people, but it does describe all human beings as being of “one blood”.

Acts 17:26, says “…that God has made of one blood, all nations of men for to dwell on all the face of the earth. So apparently we are all related. Welcome to the family. Unfortunately that mindset is foreign to many and I’ll tell you why.

In 1859 Charles Darwin published his book “On the Origin of Species by Means of Natural Selection or the Preservation of Favored Races in the Struggle for Life.”

Mr Darwin’s evolution theory was (and still is) inherently a racist philosophy, teaching that different groups or “races” of people evolved at different times and rates. So it would stand to reason according to his theories that some of us are still more ape like than others. His idea. Not mine.

Scientists have proven that we are all biologically the same. Why are we holding on to race as a social construct when it has no biological reality? The differences that set us apart are cultural. Not racial. The word race is actually pretty meaningless. But unfortunately we like to be able to label people so that we can judge them accordingly. We don’t even get skin deep any more. Now we label on the basis of clothing whether it’s a hoodie or police uniform. Isn’t that what Hitler did with the Jews during the holocaust? Which by the way is a perfect example of the consequences of evolutionary thought.

We get so caught up in the trivial things that make us different such as skin color or eye shape when genetically those things only differentiate us by .01%. What we suffer from is not racial but rather it is cultural. Cultural differences are to be understood and in most cases appreciated. Not attacked. No piece of true art is painted with just one color.

As a white male American I don’t pretend to know what it’s like to be a person of color in this country. That has never been my struggle. I hate that slavery ever existed anytime in human history. But I do know what it’s like to be a minority. I’ve worked and lived in Africa. I’ve spent months at a time in various countries. I know what it’s like to live in Nigeria and be mocked because I’m white. To be called “oyebo” or “mumuya” as I walk down the street. To be judged on the color of your skin, unfortunately, is world-wide. Until we recognize that we are all of the same blood in the HUMAN race we will never reconcile those cultural differences and embrace each other as equals. And yes my friend…we ARE equals.