What’s so Special About Labor Day? 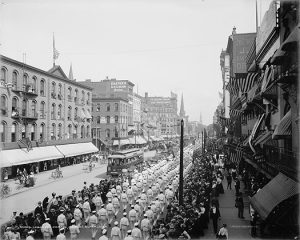 Change is a-coming. If you’ve got a new pair of white shoes, a new white outfit, or a favorite seersucker suit, go ahead and wear them while you can. Monday signals the end of summer, and wearing any of those things on Tuesday will be considered a serious faux-pas by the fashion police and those who are generally concerned with such things. College football is back this weekend (hooray!), families will take a last summer trip, and parades will wind through almost every town and city. It’s Labor Day!

Ask most people exactly what the holiday is about and, if you’re lucky, you’ll get some vague answer about rewarding people who work hard. If not, you’ll likely hear all about the glories of a three-day weekend. Fortunately, most of us don’t need to know the origins of a holiday to enjoy the time off.

In addition to changing America and the world, the Industrial Revolution changed how workers earned their livings. People whose parents had worked in agriculture moved into factories to earn their livings. They usually worked with no safety equipment, no bathroom or kitchen facilities, and little-to-no formal training, often using heavy equipment and toxic chemicals. The average workday was twelve hours long, and the average work week was six-and-a-half to seven days long. Even worse, most factories employed large numbers of children.

The workers unionized, and things began to change, but slowly. In 1882, unions in New York City joined together, and 10,000 workers took unpaid leave to march from City Hall to Union Station. Without realizing it, they marched in the country’s first Labor Day parade. Oregon became the first state to declare Labor Day an official holiday. Other states followed their lead, but it would take a tragedy to get the U.S. government on board.

Workers at the Pullman Palace Car Company of Chicago went on strike in 1894, calling for better hours, more pay, and safer working conditions. Several weeks later, the American Railroad Union called for a boycott of all Pullman cars. Since that brought shipping and transportation to a halt across the country, U.S. troops and U.S. Marshalls were sent in to break the strike. When the riots were brought under control and the shooting stopped, a dozen union members laid dead.

People around the nation were angry, and government officials feared more violence would break out. Soon after, Congress voted to approve a national holiday celebrating the American worker. It would be called Labor Day, and it would fall on the first Monday of September. President Grover Cleveland signed the bill six days later, hoping to appease the unions and American workers.

Over the next decades, the number of workdays shrank while pay increased. Children were eventually banned from working in the factories, unhappily returning to school. At the time, labor unions accomplished a lot more than driving up consumer prices and forcing workers to pay dues.

Twelve Americans killed by U.S. troops is the last thing most of will think about as we enjoy the final fling of summer. For many, it’s hard to imagine unions as a force for good. This year, celebrations will include prayers and gratitude for everyone working to rescue and care for those left homeless by Hurricane Harvey. With protests, violence, and stark animosity between the American right and left, it would be easy to feel discouraged instead of festive. Looking back to the beginnings of Monday’s holiday can, however, give us hope.

Things seemed dark back then. Hearing about American workers killed by the American military on American soil must have been terrifying. Working twelve-hour days and seven-day weeks for barely enough money to survive had to have been soul crushing. But, the nation not only survived; it prospered. Tragedy was used to drive people to a better future. Maybe history will repeat itself if we all work together to make things better instead of giving in to fear and hate.