What’s Really Going On in the White House? 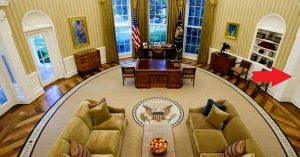 From stream.org and written by James Robison

On Monday, President Donald Trump met with his Faith Advisory Council in the Oval Office. There, the council prayed for him. Among those on hand was Jack Graham, Pastor of Prestonwood Church in Plano, Tx. Stream publisher James Robison would have been there as well, but for recent eye surgery. On Thursday, Rev. Robison spoke with Dr. Graham to get the inside story of the historic prayer, the Council and the President’s embrace of those of faith.

Robison: Jack, last year you and I were invited to join President Trump’s Faith Advisory Council because we have genuine concern for the well being of our nation, for the future of freedom and the importance of faith and family. We knew that we would be misunderstood by some. Why were you willing to join that group?

Graham: We love America and we care about the future of our children and grandchildren. The issues at stake are so important for our families and our communities that is impossible to stay out of the fray. We knew it was going to be difficult and demanding for all of us, and yet I gladly offered my time and energies to help advance what we so deeply care about as Bible-believing, evangelical Christians — the sanctity of life, religious freedom, our families, marriage, the future of Israel and many other issues.

I’ve never said no to the call of God on my life and I believed this to be a call of God. I’m a pastor and I’ve never desired to be anything more than a pastor. But with that comes the responsibility of using my influence wisely. I’ve always leaned toward saying yes to opportunities to influence the community, to help our nation and I believe we’ve had that opportunity. I couldn’t say no. I gladly said yes.

Robison: I think we joined with all of those who love freedom, faith and family and who said political correctness is damaging and an out of control, overreaching government has to be limited. We stepped up to try to reverse the trend and began to spend time with a person we may not have necessarily chosen.

Seeing Prayers for the President Answered
Robison: This very diverse faith council agreed to work together in miraculous, supernatural unity for the common good of the people and freedom, and this President has been very open and responsive. Do you agree that’s what motivated the council members?

Graham: Yes, we as followers of Jesus have always believed that we are to be politically incorrect. “Political correctness” is the mantra of the media and the world at large and Christians are always against an anti-God or anti-biblical worldview. Jesus stood against the prevailing worldview in His day. So we have always been a voice speaking to the culture or the government leaders. And the great opportunity we have in America is the freedom to speak, and leaders like our President want to hear from us.

When we prayed for him in the Oval Office earlier this week, though he was under a great deal of pressure, he was buoyant and joyful.
For many of us the promise of the Supreme Court originalist, conservative justices that would be appointed, along with religious freedom and the sanctity of life got us on board. It is always the issues at stake that move me and move Christians, so we got on board based on principles. It’s never about personalities per se. It’s always about principles and we believed that this man desired the truth.

When you get to know someone, levels of trust build. Here we are seven months into his presidency and he’s done so many things that we prayed he would do and that we encouraged him to do. Justice Gorsuch and others like him will come in time as long as President Trump is in office.

I look at the list of things that have been accomplished — the Executive Order on religious freedom, the lower courts — we talk about the Supreme Court, but we care about our communities and the federal judges that are all across America. The President has put up a list of 23 vetted federal circuit judges and only three have been put through by the committee. That’s not acceptable. Both Republicans and Democrats have failed to get good judges confirmed. We want to use our influence to move the ball forward.

Read more of the interview here….https://stream.org/faith-prayer-oval-office-james-robison-speaks-jack-graham/