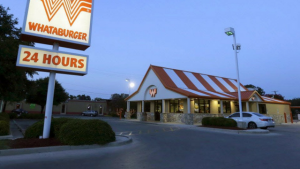 As anti-gun fear and hysteria sweep the nation, it seems a few clueless people are so incapable of thinking straight that they’re terrified at the sight of an inanimate weapon.

Our country has existed for well over 200 years and yet only in the last few decades is everyone suddenly terrified of firearms, even, and perhaps especially, when they’re being carried by not only law-abiding concealed carry permit holders but law enforcement officers.

A police detective in Friendswood, TX was recently refused service at a local Whataburger chain for open-carrying his police weapon as he sought to purchase a delicious Whataburger meal.

With his badge displayed visually right next to his gun.

Whataburger does have a policy, according to The Blaze, that customers who are open-carrying in their restaurants will not be served, but they are supposed to make exceptions for police officers, which this Whataburger was clearly not willing to do.

When the officer showed his police ID in addition to his badge to the manager, he was still refused.

All in all, the poor man left without his burger, and Whataburger corporate had to end up doing some damage control.

They called the incident “an unfortunate misunderstanding of our open carry policy,” and released this statement:

This was an unfortunate misunderstanding of our open carry policy, and we’ve talked to the detective to make this right. He was understanding, accepted our apology and said he plans to come back to Whataburger. Our company policy allows law enforcement with proper identification to open carry at our restaurants, and we’ll be reinforcing this policy with employees through additional training.

We’ve also been in contact with the Friendswood Police Officers Association. We want to make it clear that this detective and all law enforcement are welcome in our restaurants and we’re proud to serve them.

This isn’t the first time a Whataburger employee has refused service to a police officer. Last October, The Blaze notes, an employee was fired after she refused to serve two Texas police officers.

In that incident, anti-police bias may have been to blame. Let me know what you think (also from The Blaze):

“According to the Dallas Morning News, the Whataburger employee not only refused to serve the two Denison officers, but cursed at them and told them that she would continue to refuse them and their colleagues service. She also called them racists and told them she disliked them because they ‘beat up’ her boyfriend.”

This is what is happening in our nation, though. The most recent Whataburger incident points to people so clueless about guns and gun violence they believe an on-duty police detective poses some kind of threat. The second incident is a reflection of the flat-out anti-police bigotry cultivated by a political ideology in this nation that preaches police are wrong even when they’re doing their jobs.

Either way, this lack of respect for police officers and the firearms they rely on to keep themselves and others safe is a very dangerous mentality that is becoming all too common in our uninformed and hysterical society.