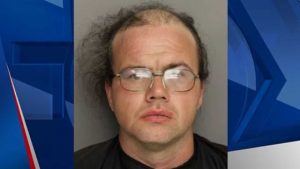 A Texas man who was dressed up as a woman allegedly videotaped a female victim inside the ladies’ room of a gas station, thus proving pretty much every conservative who warned about this kind of behavior, completely right.

Thirty-eight-year-old Shawn Thomas Hallett was arrested on Sunday and has been charged with a voyeuristic crime. Police found footage of the victim on the man’s cell phone.

This is truly disturbing.

“Police said the female victim said she entered the store bathroom, knocked on a stall door, heard a male voice respond but looked down to see ‘female shoes’, so she used the adjacent stall,” reports FOX Carolina.

When she noticed a cell phone protruding from under the stall next to her, she ran out of the restroom and alerted law enforcement.

According to police, two other bystanders confirmed witnessing a biological male in women’s clothing leave the ladies’ restroom.

Officers were able to apprehend Hallett near the store. He was still wearing women’s clothing and a wig.

One of the biggest concerns that folks have voiced over the whole nutty left-wing craze surrounding transgenders being allowed to use the bathroom of the sex they “identify” as has been the fact that many perverts would take advantage of the system and use it as a means to create new victims of sexual assault and harassment.

This is precisely what has been happening ever since. Allowing this sort of shenanigans opens up more folks to the possibility of becoming victims. It tramples the right to safety and privacy of women.

These kind of stories are going to continue flowing out of this mess if things don’t change.