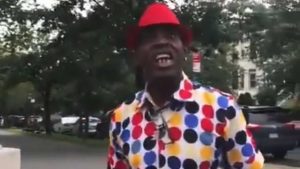 A man in New York City was video recorded yelling all kinds of obscene anti-Semitic slurs and remarks at a Hasidic Jew who was out and about on his way to visit Rabbi Menachem Mendel Schneerson’s gravesite. The 25th anniversary of the famous rabbi is rapidly approaching.

The assailant in the case has not been identified yet.

According to Menachem, the man randomly approached him and his friend Moshe R. as they were leaving a barber shop in Brooklyn and began screaming at them: “You guys robbed me.”

Menachem said that he tried to get the man to calm down so he could figure out what the man’s problem was but then the man launched into hurling anti-Semitic remarks at them.

What makes this verbal assault even more egregious is the fact that Moshe’s parents, who are still alive, are both survivors of the Holocaust. Can you imagine how awful it must have felt to hear such hateful words being tossed at you, knowing your family barely survived this horrific fate that this man is wishing on you? It’s horrifying.

Menachem went on to tell the Daily Wire, “I never thought I would encounter hate like this in America. Just as this was a random act of unprovoked hatred, I want to urge everyone to take the initiative to do random acts of goodness and kindness to others, regardless of any differences you may have them. At least this way something good can come out of this to counter the hate, to fight darkness with light as Lubavitcher Rebbe has taught us.”

Dear @NYCMayor @BilldeBlasio, We're very sorry to bother you during your busy campaign in NH, but Is this what you mean far right?

This reportedly happened on the next block, the man says: “Hitler had the right to fucking kill every one of you” pic.twitter.com/zjinWXFHeI

Police have said that anti-Semitic hate crimes in the city have skyrocketed by 82 percent over the first quarter of 2019.

This likely has a lot to do with the normalization and acceptance of such hateful rhetoric and attitudes exhibited by members of Congress like Rep. Ilhan Omar and Rep. Rashida Tlaib.

The left has a deep hatred for Jews and Israel in particular due to the fact they believe them to be imperialists stealing the land of Israel from the rightful Palestinian owners, which, of course, is complete and total nonsense.

Let’s hope we can find a peaceful solution to ending this sort of ignorance and hatred before it escalates into physical violence.