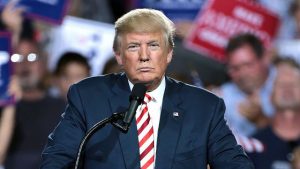 California Rep. Brad Sherman is not wasting any time making a grand gesture to try appeasing the ever growing “woke” community in his home state as he seeks to introduce articles of impeachment against President Trump, filing as his first order of business in the now Democrat-controlled House.

We all know the president hasn’t done anything that can be proven at this time that would make him a worthy candidate for impeachment. This is just a show Democrats put on to appease their base so when election time comes around they can say, “See? I tried. I took action.”

Sherman, who authored the resolution and has introduced it once before, in 2017, told the Los Angeles Times that he does not believe there is any compelling reason that Congress should waiver or delay in taking action against Trump. To that end, Sherman preempted his own party leadership and filed the resolution calling for Trump to be removed from office.

“There is no reason it shouldn’t be before the Congress,” Sherman told the paper. “Every day, Donald Trump shows that leaving the White House would be good for our country.”

Sherman’s resolution calls for Trump to be impeached for “threatening, and then terminating” former FBI Director James Comey because Comey was “conducting one or more investigations into Russian state interference in the 2016 campaign,” the Daily Mail reported.

He says he may add additional articles later, but wanted to file the first document as a challenge to his Democratic colleagues who have yet to express their support for pursuing impeachment. “Every member of the House will have to address whether there are formal articles of impeachment pending,” he told the LA Times.

Rather than attempting to work with their colleagues across the aisle and actually get things done to improve life for American citizens and protect their God-given constitutional rights, they would rather expend all of their energy fighting Trump tooth-and-nail.

It’s a waste of effort and energy, but all they care about is getting even for the beat down they received in the 2016 election. Sad, isn’t it?