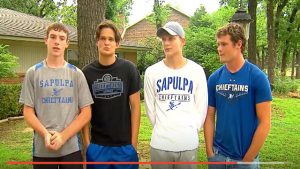 Four teenage boys from Oklahoma are being treated as heroes after they risked life and limb to rescue their 90-year-old neighbor who was trapped inside her burning home last month.

This is the kind of story that reminds you that despite all of the division and hate that seems to be on every page of the news, there’s still good things going on all around us. Let’s hope we hear more stories like this in the days ahead.

Wyatt Hall (17), Dylan Wick (16), and brothers Seth (16) and Nick Byrd (14) were hanging out at Hall’s home in Sapulpa a few weeks ago when they smelled something burning and noticed smoke coming from a house across the street. What they didn’t know at the time was that 90-year-old Catherine Ritchie was inside and struggling to find a way out to escape the fire that had already engulfed her bedroom.

The boys sprang into action. One broke the glass of the front door of the burning home to gain access while a second ran around to the back door and kicked it in. A third teen sprinted to another neighbor for an ax and help, and the fourth called 911.

Once inside Ritchie’s home, 14-year-old Nick found the elderly woman in her smoke-filled hallway, picked her up, and told her “We’re getting out of here,” then carried her to safety with the help of his brother.

They boys’ heroic efforts didn’t stop there. They waited with Mrs. Ritchie, comforting her until first responders, along with her family members, arrived.

The boys received a thank you from Ritchie’s daughter on behalf of the woman’s entire family.

She wrote a blog post where she wrote, “Thank you for being the kind of young men who thought about another person above yourselves. Thank you for staying safe yourselves as well. Thank you to your parents who obviously raised you in such a way that lead you making life saving and heroic decisions on behalf of someone else.”

The youth of today often seem as if they’re brainwashed and can’t think for themselves, as if they are robots dedicated to doing whatever the will of the state dictates to them, but this proves that’s not true.

There is yet hope for the future of our great nation, and these young men are the proof that’s indeed true.